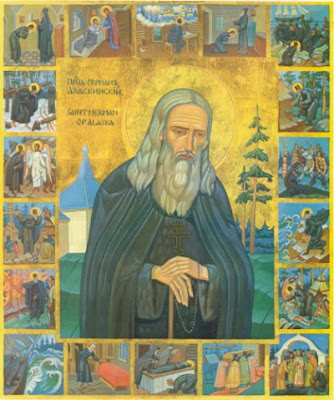 Saint Herman of Alaska (born 1756 or 1760 in Serpukhov, Russia – died December 13 or November 15, 1837 on Spruce Island, Alaska) was one of the first Eastern Orthodox missionaries to the New World, and is considered by Orthodox Christians to be the patron saint of the Americas.

Saint Herman was born in the town of Serpukhov in the Moscow Diocese around 1756. Herman is his name in monasticism; his birth name is unknown. At 16, he entered the Russian Orthodox monastic life at the Trinity-St. Sergius Hermitage near St. Petersburg.

There, while still a novice, he developed a severe throat infection or abscess. After fervent prayer before an icon of the Theotokos, he collapsed into a deep sleep. During this sleep, he saw a vision in which he was greeted by the Virgin Mary and healed. Upon waking the next day, there was no trace of the past infirmity. Approximately five years later he transferred from Trinity-St. Sergius Hermitage to Valaam Monastery. Eventually he was tonsured a monk, though he was never ordained to the priesthood. While at Valaam, he was under the spiritual guidance of Abbot Nazarius who had played a significant role in the revitalization of spiritual life in Russia. During this time, the head of the Golikov-Shelikov Company, Gregory Shelikov, visited Valaam and made a request for several monks to begin a mission into the Alaskan territory. Herman was selected, along with seven other monks.

St. Herman and the other monks arrived on Kodiak Island on September 24, 1794, aboard a ship named The Three Saints, a name which became that of Three Saints Bay, Alaska. The monks converted the native Aleuts, and as time progressed they found themselves protecting the natives from exploitation and abuse. Because of this moral stance the monks themselves were abused, arrested and physically threatened. In time, enduring hardship, inclement weather, illness and more, Herman stood as the only remainder from the original band of missionaries, the others either being martyred for their faith, dying of natural causes or returning to Russia.

St. Herman felt it his duty to protect the Aleuts from exploitation. He defended them against the often cruel treatment of those who controlled the colony. His concern for their needs have been documented, expressed in letters sent to the former administrator of the colony, Simeon Ivanovich Yanovsky. Herman also would intercede before the governors on behalf of the oppressed. He helped those in need in whatever way he found possible.

Between the years of 1808 and 1818, St. Herman lived on Spruce Island. Spruce Island is almost completely covered by forest and is separated by a strait about a mile and a quarter wide from Kodiak Island. Selecting this island for the location of his hermitage he called the land there "New Valaam" after the monastery from which he had left to come to America. He dug a cave in the ground and lived out his first full summer there. It was in this cave that he was later buried. To endure the harsh winters he constructed a cell in which he lived for more than forty years.

A small chapel was built as well, along with a school and guest house. The local people would visit him often. Food was produced from an experimental garden he planted for himself and the orphans of the land. He devoted his life to prayer and to performing those services he could do as a simple monk who had not been ordained to the priesthood.

His love for the people of Alaska was sincere and he found happiness in being around the children. An epidemic plagued Alaskans when an American ship made land at Kodiak. Herman remained with the ill and dying, offering them constant comfort and ceaseless prayer. It is said that his love was so genuine that he could see into the hearts of his spiritual children and help them.

The natives regarded him as their intercessor before God. When there was a tsunami on the Island, St. Herman took an icon of the Theotokos, placed it on the beach and assured the people that the water would not rise beyond the place where the icon was, and it did not. When there was a great fire on the island, it is said that he dug a trench and stayed the flames. Prior to his death he foretold that there would be no priest to bury him and that he would be forgotten for 30 years. He died on November 15, 1837, but was not buried until December 13 because a priest could not come to serve the funeral, and was forgotten until the first investigation of his life in 1867 by Bishop Peter of Alaska. This investigation was followed by publications of his life in 1894, 1900, and 1952. In 1952 an Akathist Hymn (devotional song, prayer or chant) was composed in his honor.

On March 11, 1969, the Great Synod of Bishops of the Orthodox Church in America (OCA) solemnly proclaimed the Act of the Universal Church Canonization of the Staretz Herman to Sainthood in the Orthodox Church in America: "Taking into consideration the long and undisputed witness of the grace of God, appearing through the servant of God, the Staretz Herman of Alaska." Saint Herman was the first saint from America to be canonized by the Orthodox Church. The glorification of Father Herman was performed on August 9, 1970, at Holy Resurrection Cathedral in Kodiak, Alaska by the OCA with parallel services at the Synodal Cathedral of Our Lady, Joy of all who Sorrow in San Francisco by the Russian Orthodox Church Outside Russia (ROCOR). His relics were transferred from his grave underneath the church of Saints Sergius and Herman of Valaam Chapel on Spruce Island to the Holy Resurrection Cathedral in Kodiak.

There are several feast days throughout the year on which Saint Herman of Alaska is commemorated. Since there are two different calendars currently in use among various Orthodox churches, two dates are listed: the first date is the date on the traditional Julian Calendar, the second date, after the slash, is the same day on the modern Gregorian Calendar:


The major portion of his relics are preserved at Holy Resurrection Cathedral in Kodiak, Alaska, while his burial site at the Sts. Sergius and Herman Chapel, Spruce Island, Alaska is an important pilgrimage site, where the devout will often take soil from his grave and water from the spring named in his honour. A portion of his relics are enshrined at the St. Ignatius Chapel at the Antiochan Village in Pennsylvania, the headquarters of the Antiochian Orthodox Christian Archdiocese of North America, where he is regarded as one of their patron saints.

In 1963, with the blessing of St. John Maximovitch, Archbishop of Shanghai and San Francisco, a community of Orthodox booksellers and publishers called the St. Herman of Alaska Brotherhood was formed to publish Orthodox missionary information in English. One of the founders was Father Seraphim Rose. The Brotherhood did much to advance the cause of St. Herman's glorification as a saint. Saint Herman's Orthodox Theological Seminary in Kodiak, Alaska is named in his honor, as are numerous parish churches throughout the world.

On Tuesday, August 4, 1970, the 91st Congress of the United States acknowledged the Glorification of St Herman of Alaska with a speech in the Senate, and his biography was formally entered into the Congressional Record, Vol. 116, No. 133.

In 1993, Patriarch Alexis II visited Kodiak to venerate the relics of Saint Herman. He left as a gift an ornate lampada (oil lamp) which burns constantly over the reliquary. Pilgrims from all over the world are anointed with holy oil from this lampada.

Saint Herman is honored with a feast day on the liturgical calendar of the Episcopal Church (USA) on August 9.


Troparion (Tone 7)
Joyful North Star of the Church of Christ,
Guiding all people to the Heavenly Kingdom;
Teacher and apostle of the True Faith;
Intercessor and defender of the oppressed;
Adornment of the Orthodox Church in America:
Blessed Father Herman of Alaska,
Pray to our Lord Jesus Christ
For the salvation of our souls!
Troparion (Tone 4)
O blessed Father Herman of Alaska,
North star of Christ's holy Church,
The light of your holy life and great deeds
Guides those who follow the Orthodox way.
Together we lift high the Holy Cross
You planted firmly in America.
Let all behold and glorify Jesus Christ,
Singing his holy Resurrection.
Kontakion (Tone 3)
The eternal light of Christ our Savior
guided you, blessed Father Herman,
on your evangelical journey to America
to proclaim the Gospel of peace.
Now you stand before the throne of glory;
intercede for your land and its people:
Peace for the world and salvation for our souls!