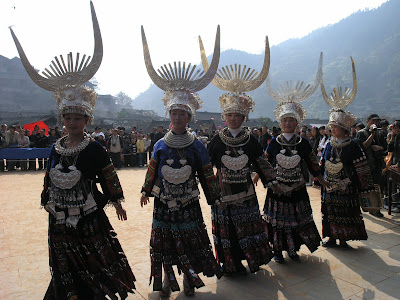 Festival represents a nation's culture. In China, each of 56 ethnic communities boasts their own festivals which record and carry forward traditions, cultures and ethnic folklore.

The Sister Festival is one of the Miao people's most active festivals. It is held on the 15th day of the third lunar month, and the Miao celebrate it with numerous traditional activities and customs.

Sister Festival, held in Shidong, Taijiang County, Guizhou Province, is the Miao people's busiest time of the year, and it is an opportunity for Miao youth living along the middle reaches of the Qingjiang River to choose their dates. During the festival, Miao people eat "Sister Rice," dress up, dance, watch bullfights, compete in a canoeing contest and sing.

No one knows when this ancient festival originated, but the 500 years of history in Shidong implies that the festival dates back to the remote past.

There was once a family with seven daughters. The girls were very beautiful when they grew up, and they wanted to marry good men. Their parents promised to help make their wishes come true. At their parents' urging, the seven girls went to the mountain to gather leaves, flowers and herbs.

They then cooked pots of colorful rice. The family invited young men from the village and neighboring communities to eat the rice, sing folk songs during the daytime and dance away the night. The non-stop singing and dancing allowed the girls to test and observe the men. After three days and nights of singing and dancing, the girls chose from about 100 men their dream husbands. They presented the men colored rice and told them to choose a time to return for the wedding ceremonies. By cooking colorful rice and inviting men from miles around for food, singing and dancing, the sisters became the first of the Miao people to marry for love. That helped the group's culture to evolve.

Sister Rice originally had seven colors - one for each sister. Nowadays, there are more colors of the rice, symbolizing there are more than seven beautiful Miao girls. These days, the guests receive, after the singing, rice from the Miao girls. The men quickly learn if the women like them. A woman places a hot pepper in the man's rice if she does not wish to befriend him. She places a hook made from bamboo in the rice if she likes him.

In honor of the seven sisters, and to promote healthy reproduction, the Sister Festival has been passed down through the generations.

Today, besides dating lovers, Sister Festival also provides a good opportunity for local Miao people to show their charms and communicate with one another. The most popular event during the festival is playing drum dance which is a collective dance with drum beats. Women wear magnificent apparels and gather together to play the dance. The most formally dressed are unmarried young girls and newly wed brides. They wear sophisticated and splendid silver apparels which weigh 10 to 15 kilograms. The silver apparel is the top-level festive apparel for Miao women. They wear them only at weddings or when they go back to their own parents' homes.

When Miao girls turn 16, their mothers dress them up and take them to the Sister Festival. Even if they are not ready to let their daughters get married, the women want to show off their beautiful girls - in their splendid clothes. Female costumes of Miao women in Shidong fall into four categories according to degrees of sophistication.
Miao people take pride in their daughters because their girls are world-renowned for their beauty. Sister Festival's popularity grows each year. As more people flock to Shidong in search of beautiful girls, the village will become more charming.