Holy God, Holy Mighty, Holy Immortal, Have Mercy on us! 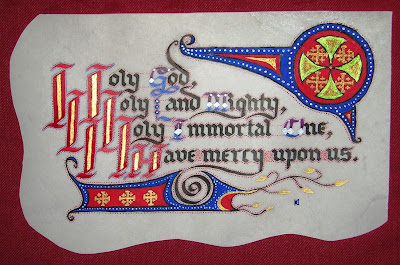 The Trisagion (Greek: Τρισάγιον "Thrice Holy"), sometimes called by its opening line Agios O Theos or by the Latin Tersanctus, is a standard hymn of the Divine Liturgy in most of the Eastern Orthodox Churches, Oriental Orthodox Churches and Catholic Churches.

In those Churches which use the Byzantine Rite, the Trisagion is chanted immediately before the Prokeimenon and the Epistle Reading. It is also included in a set of prayers named for it, called the Trisagion Prayers, which forms part of numerous services (the Hours, Vespers, Matins, and as part of the opening prayers for most services).

The Trisagion prayer is an ancient prayer in Christianity. It may be that the prayer was originally an expansion of the angelic cry recorded in Revelation 4:8 (sometimes called the Sanctus).

In English:
Holy God, Holy Mighty, Holy Immortal, have mercy on us.

The hymn is of great antiquity, and perhaps much older than the event assigned by the Greek Menology as connected to its origin. The tradition recounts that during the reign of Theodosius II (408-450), Constantinople was shaken by a violent earthquake, 24 September, and that whilst the people, the emperor and the Patriarch Proclus of Constantinople (434-446) were praying for heavenly assistance, a child was suddenly lifted into midair, to whom all cried out Kyrie eleison ('Lord, have mercy'). The child was then seen to descend again to the earth, and in a loud voice he exhorted the people to pray : 'Holy God, Holy and Strong, Holy and Immortal'. After giving this exhortation, the child died.

The fact that the hymn was one of the exclamations of the fathers at the Council of Chalcedon (451), and that it is common not only to all the Greek Oriental liturgies, but was used also in the Gallican Liturgy (see Saint Germain of Paris, d. 576), suggests that the hymn is extremely ancient, perhaps of apostolic-era origin.

The Coptic Orthodox Church believes that the Trisagion originated from Nicodemus. While taking the body of Christ off the cross with Joseph of Arimathea, Nicodemus saw Jesus Christ's eyes open and then shouted "Holy God, Holy Mighty, Holy Immortal". Traditionally, it is also considered proof that his Divinty did not part from his humanity.

Interestingly, the Gallican Liturgy refers to it as being sung both in Greek and in Latin: Incipiente præsule ecclesia Ajus [that is, Agios] psallit, dicens latinum cum græco, as also previously in Greek alone, before the Prophetia. Benedict XIV thought that the Greek formula was joined with the Latin in allusion to the divine voice heard at Constantinople. But the explanation seems hardly necessary, in view of the retention of Kyrie eleison in the Roman Liturgy, as well as such Hebrew words as Amen, Alleluia, Hosanna, Sabaoth. It is true that the Kyrie eleison is not joined to a Latin version; on the other hand, it is so simple and occurs so frequently, that its meaning could easily be learned and remembered - whereas the entire Trisagion might well receive a parallel version into Latin.

When the Trisagion is sung during the Divine Liturgy of the Byzantine Rite, before the Prokeimenon of the Gospel that precedes the Epistle reading, it is normally sung three times to one of many melodies composed for it. This is followed by singing Glory... Now..., the second half of the Trisagion once, and finally the whole Trisagion a fourth time:

On the other hand, in the usage of the other, non-Byzantine Eastern Churches, the Trisagion is simply sung thrice, with no Glory... Now....

In the West Syrian Rite, used by the Syrian Orthodox Church, the Syrian Catholic Church, Syro-Malankara Catholic Church, Malankara Orthodox Syrian Church and in a hybrid form, the Maronite Church and other derived rites of Syriac Christianity, the Trisagion is sung towards the beginning of the Holy Qurbana (Divine Liturgy), after the Old Testament Readings and the Introductory Hymn.

In the Armenian Rite, used by the Armenian Apostolic Church and the Armenian Catholic Church, the Trisagion occurs early in the Divine Liturgy, coming after the Monogenes Hymn and the Midday Hymn & Psalm.

During most services of the Eastern Orthodox Church, the Trisagion is combined with several other prayers to form a unit, often called simply The Trisagion Prayers. This set of prayers forms part of the opening prayers of most services, and is also located within many of the Hours and daily cycle of services.

The full unit known as the Trisagion Prayers normally looks like this:

While it is possible that the Trisagion has origins in the Biblical 'thrice holy' of Isaiah 6:3 (the Sanctus: Holy, holy, holy, Lord of Sabaoth. Heaven and earth are full of your glory', etc.), they are today separate prayers. The latter is used at a different point in the Liturgy (in the Divine Liturgy, during the anaphora).

In the Latin Church, the main regular use of the Trisagion is on Good Friday, when it is sung throughout the ceremony of the Adoration of the Cross. In the Sistine Chapel, the traditional setting was the polyphonic musical setting of Palestrina. During this service, the hymn is sung by two choirs, alternately in Greek and Latin, originally two antiphonal Greek and Latin choirs, as follows:

The hymn is sung in this manner thrice, responding to the first three of twelve reproaches.

In the Latin Church, the Trisagion is also employed in the Chaplet of Divine Mercy and the Little Office of the Blessed Virgin. There is also a Chaplet to the Holy Trinity used by the Order of the Most Holy Trinity called 'The Trisagion' or the 'Angelic Trisagion', which makes use of both forms of the Trisagion. It is also used in the hour of Prime, in the ferial Preces, on ferias of Advent and Lent and on common Vigils.