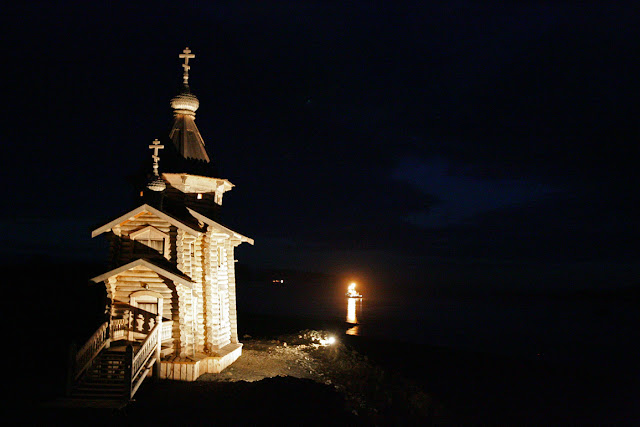 Antarctica has several religious buildings used for worship services:
There are also churches on some of the Antarctic islands situated north of 60° south latitude (and thus not part of the Antarctic Treaty System), including Grytviken on South Georgia (since 1913), and Port-aux-Français on the main island of Kerguelen.

Chapel of the Snows is a non-denominational Christian church located at the United States McMurdo Station on Ross Island, Antarctica. The chapel is the southernmost religious building in the world and has regular Catholic and Protestant services. During the Austral Summer, the chapel is staffed by rotational chaplains. The U.S. Air National Guard supplies Protestant Chaplains and the Archdiocese of New Zealand supplies Catholic Priests. The chapel is also host to services and meetings for other faith groups such as Latter Day Saints, Baha'i, and Buddhism and non-religious groups such as Alcoholics Anonymous. These meetings are dependent on lay-leadership to be the points of contact and facilitators. The building itself may hold up to 63 worshippers. The current chapel, dedicated in 1989, features custom stained glass featuring the Antarctica Continent, the Erebus Chalice (during Austral Summers only), and memorabilia from the US Navy's historic involvement in Operation Deep Freeze.

Trinity Church (Russian: Церковь Святой Троицы) is a small Russian Orthodox church on King George Island near Russian Bellingshausen Station in Antarctica. It is the southernmost Eastern Orthodox church in the world.

The ambitious project to establish a permanent church or even a monastery on Antarctica surfaced during the 1990s. A charity named Temple for Antarctica (Храм - Антарктиде) was approved by Patriarch Alexius II and received donations from across Russia. They organized a competition for the project that was won by architects from Barnaul P.I. Anisifirov, S.G. Rybak and A.B. Schmidt.

The church is a 15m-high wooden structure built in traditional Russian style. It can accommodate up to 30 worshipers. The structure was built out of Siberian Pine by Altay carpenters led by K.V. Khromov, then dismantled, taken by truck to Kaliningrad and shipped to King George Island by the Russian supply ship Academician Vavilov. It was assembled on high ground near the sea shore by the staff of Bellingshausen Station, under the general supervision of the 30-year-old Father Kallistrat (Romanenko), who was to become the church's first priest. Kallistrat, a hieromonk of Troitse-Sergiyeva Lavra, had previously served at the Lavra's skete on Anzer Island in the subarctic Solovki Archipelago.

The iconostasis of the church was created by Palekh painters. The church bells were commissioned by the descendants of Sergey Muravyov-Apostol.

The church was consecrated on February 15, 2004, by Theognost (Феогност), the Bishop of Sergiyev Posad and the Namestnik (abbot) of Troitse-Sergiyeva Lavra, who visited Antarctica for this occasion, along with a number of other clerics, pilgrims, and sponsors.

The church is manned year-around by one or two Orthodox priests, who are hieromonks of Troitse-Sergiyeva Lavra volunteering for the Antarctic assignment. Similarly to the personnel of most year-round Antarctic stations, the priests are rotated annually by the Lavra; however, several of them, including Father Kallistrat, chose to come back to King George Island for another one-year tour of duty after a year or two on the mainland.

Among the priests' tasks are praying for the souls of the 64 Russian people who have died in Antarctic expeditions and serving the spiritual needs of the staff of Bellingshausen Station and other nearby stations. Besides Russian polar researchers, the church is often visited by their colleagues from the nearby Chilean, Polish, Korean, and other research stations, as well as by tourists. For the benefit of Latin American visitors, some church services are conducted in Spanish.

On occasions, the priest baptizes new adherents of Christianity in the Southern Ocean. On 29 January 2007, the priest of the church celebrated what was likely the first ever church wedding in Antarctica. The husband, Eduardo Aliaga Ilabaca, is a staff member of a Chilean Antarctic base, who had joined the Orthodox Church soon after the opening of the Antarctic temple; his wife, Angelina Zhuldybina, is Russian.

When not busy with church work, priests help out with the general maintenance of the Bellingshausen station.

The St. Ivan Rilski Chapel (St. John of Rila Chapel, Bulgarian: Параклис Свети Иван Рилски) at the Bulgarian base St. Kliment Ohridski on Livingston Island in the South Shetland Islands is the first Eastern Orthodox edifice in Antarctica, and was once the southernmost Eastern Orthodox building of worship in the world (cf. Trinity Church, Antarctica). The three foundation stones of the 3.5 by 3.5m building were laid on 9 December 2001 by Protodeacon Lyubomir Bratoev, and the completed Chapel was consecrated on 9 February 2003.

The Chapel of Santisima Virgen de Lujan is a Roman Catholic chapel located at the Argentine base Marambio on Seymour-Marambio Island in Antarctica. The permanent steel-structured chapel is used for Christian worship by the various Argentine personnel on station (as well as visitors). The chapel features a bell-tower and cross.