Harbin is world famous for its ice and snow extravaganza. But its summer charm could be the best-kept secret in the tourism industry - and this doesn't include the weather, which is mild and hardly needs air conditioning at night. Here are 10 things you can do in Harbin - not just to escape the heat wave but also to bask in the fun that only China's northeasternmost provincial capital (of Heilongjiang province) can offer. 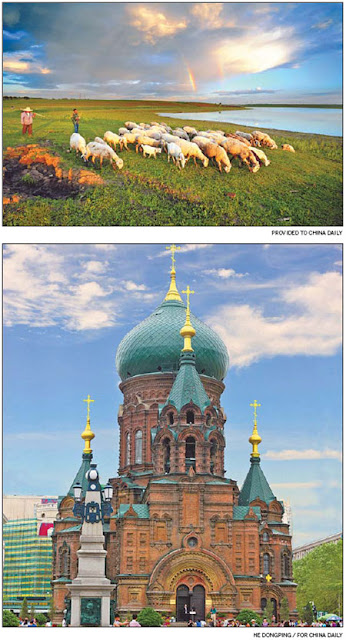 1. Spend half a day to walk along the 1,450-meter-long Central Pedestrian Street. It is Harbin's equivalent of Paris' Champs Elysees, although not as wide (it's about 22 meters). If you are an architecture expert, you'll be able to pinpoint the origins of the buildings that flank the street.

As a matter of fact, the street leading to the obelisk in commemoration of flood control by the Songhua River incorporates styles from Baroque to Art Nouveau. Lovingly restored to their former grandeur, the buildings along this corridor of architectural diversity offer the most vibrant commerce and the best people-watching opportunities in town.

And feel the road's surface while walking. What appear to be pebbles are actually 18-cm long granite slabs inserted into the ground and were designed by a Russian engineer to withstand wear and tear - and the harsh winter weather - for at least 200 years.

2. Ramble around and inside Saint Sophia Cathedral, located in downtown Harbin. The Russian Orthodox church was built in 1907 and rebuilt in 1923.

It is a lonely reminder of the time when more than a dozen Russian churches dotted the city landscape. Now stripped of its religious function but largely refurbished - by clearing the neighborhood for a 7,000-sq-meter plaza, but not repainting the interior - it houses a museum that displays photos and miniatures of old Harbin in a mythical haze. Since its restoration in 1997, the green-domed red-brick, byzantine structure has become a city landmark.

3. Harbin is a rare Chinese city where you can encounter musicians performing on the street who are not organized by the government for special functions. (Some are sponsored by businesses, though.)

They are not panhandlers and do not have open violin cases to collect donations. They just love to play music. And pedestrians love them, too. The applause is spontaneous and heartfelt.

Even though the renowned Harbin Summer Music Concert is silent this year - it is held once every two years - you'll have plenty of chances to enjoy live music at both the expected hangouts, such as outside bars, and unexpected spots, such as one branch of Harbin Bank that offers two sessions of piano and guitar playing a day - by its own well-trained bank staff.

Oh, did I mention Harbin was awarded the title of "Music City" by the UN last year?

4. A clear sign of Russian emigrants' influence is that the people of Harbin love beer.

Every July since 2002, there has been a beer bash, where you can literally taste a hundred brands and drink till you drop. As long as you do not drive afterwards, you can drown your worries and sorrows, and ratchet up your level of inebriated euphoria. To add to the festive mood, there are usually parades and carnivals.

Harbin is the first Chinese city to brew and ferment "liquid bread". And the two-week event has quickly risen to rank as one of the top three beer festivals nationwide (the others being in Liaoning province's Dalian and Shandong province's Qingdao).

Of course, you do not have to attend the festival to be among the most beer-loving citizens of China. There is an endless array of bars and pubs where you can drink beer in the same way that Parisians drink coffee on the sidewalk.

5. About half an hour outside downtown Harbin is a place called Volgar Manor, where you'll be forgiven for believing you are in Russia.

It has Russian entertainment, Russian food, Russian baths, Russian dachas, etc. But the 30-something buildings, constructed in exquisite and multifarious Russian styles, house stories galore. Most are recreations of historical structures that used to exist in Harbin or Russia but are sadly no longer extant.

Take St. Nicholas Church. Built in the late 19th century, it was the biggest landmark in Harbin until Red Guards tore it down in 1966.

Now the wooden structure stands in this 60-hectare theme park by a quiet river. Then there is the Miniature Restaurant, the original of which was built on Sun Island in 1926 and was destroyed by a fire in 1997.

The same-size replicas, now housing restaurants, hotels and an art gallery, are spread out among a fairytale setting of verdant greens and flowing water. In the summer, the glow of the sun bounces off leaves and roofs, attracting hordes of wedding photo takers and vacationers.

6. Try the khleb, Russian for "bread", what Harbinians call "lieba".

It is a big lump that could scare and surprise people from other parts of the country. (At its peak, Russians accounted for half of the city's multinational population and have left a rich gastronomic and architectural legacy.)

Another import from Russian cuisine is red sausage, which is wildly distinct from sausages anywhere else in China. For authentic Chinese food, don't miss the northeastern stew, which is Manchurian in origin.

7. Get up close and personal with the Northeast tiger - aka the Siberian tiger - at Heilongjiang Northeast Tiger Forest Park.

The world's largest breeding base of this endangered species had only eight tigers to start with in the late 1980s and now has grown to accommodate 800. You can ride a specially outfitted vehicle where you are kept in captivity while the tigers roam free. Just think that, given the destruction of primitive forests, there is little chance you'll encounter a real tiger in the wilderness.

8. Ride the small train from Bayan to Tonghe on a 188-km narrower-than-usual rail - previously used for logging and still powered by a steam locomotive - through the rural lushness of Harbin.

It's a bit out of the way and has to be pre-arranged by calling 0451-5789-2309, but you'll feel the embrace of Northeast China's summer luxuriance.

The former royal hunting ground has amenities for not only hunting but also for vacationing. You can also refresh your knowledge of the Jin Dynasty (1115-1234), when ancestors of the Manchu, fighting such Han generals as Yue Fei, were commemorated.

10. Last but perhaps most important, visit the vast stretches of wetlands.

Tucked away from the hustle and bustle of downtown are 125,000 hectares of wetlands, which could be Harbin's greatest ecological resource.

Not in plain view, yet within easy access - even by public transport - the wetlands offer unvarnished views of Mother Nature in their watery and shimmering splendor.

You can take a cruise along the Songhua River with a dozen choices of vessels, from luxury steamboats to double-paddle fishing canoes. Or you can take the cross-river cable car, glide from a balloon or bike along the paved roads.

By conventional means, you have six river courses and eight land routes to choose from. The First Wetland Tourism Festival, opening earlier this month, is a celebration of Harbin's second biggest wonder in its backyard - next to its ice and snow show in January and February.