Drought and Redemption – The Lessons of Global Warming 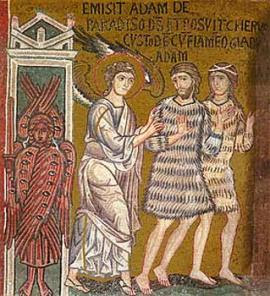 “And the LORD shall guide thee continually, and satisfy thy soul in drought, and make fat thy bones: and thou shalt be like a watered garden, and like a spring of water, whose waters fail not.” (Isaiah 58:11)

October 2010 to October 2011 was the driest of any 12-month period on record for Texas. Scorching heat, wildfires, crops destroyed, cattle herds relocated seem to be the new norm for the Lone Star state. But we are not the only ones suffering this, Asia, Africa are also experiencing similar weather patterns, bringing millions to the brink of starvation.

Who is to blame? Some say the global warming, others argue that is a natural variation of the climate, others see in it the wrath of God against a sinful generation. Nobody really knows who’s fault it is, but we all suffer greatly from it.

I am sure, based on the testimony of the Fathers, that this is not what God intended for mankind: a world with unpredictable natural calamities that affect the livelihood of billions of people every day; a world where man cannot control his environment and has to work harder and harder everyday for an elusive piece of bread. God is love and He wants better for us.

God’s true plan for mankind was revealed from the very beginning when He put Adam and Eve in the abundant Paradise and not in a forsaken desert (Gen 2:15). All was given to Man free and with the intention of eternity. Man was crowned the King of the world and all was given in his administration to be used as support towards His union with God.

The change of the entire universe that we are witnessing today is not God’s doing, Man alone is responsible. With the fall of Man came also the fall of the entire cosmos: “cursed is the ground for thy sake; in sorrow shalt thou eat of it all the days of thy life; thorns also and thistles shall it bring forth to thee; and thou shalt eat the herb of the field; in the sweat of thy face shalt thou eat bread, till thou return unto the ground”. (Gen 3:17-19) Man is the one that missed the target of his existence through sin, isolating himself from God, in a meaningless hope that things would get better this way.

What Man failed to understand was that he was never created to be alone, to live independently. This may be difficult to hear in an age where self determination and self worth is embedded in every grain of our beings, but this is the truth. “Personhood means otherness, difference, but not in isolation, because the full meaning of personhood is found in the communion of persons” writes the theologian John Zizioulas. Man was created in the image of God and the image of God is a Trinity of Persons, living in perfect harmony and love. God made Man so he also can participate in this, to share God’s love through Communion, not independence. This terrible illusion, this false dream of grandeur, has had devastating effects on the entire Creation.

As a consequence of this disaster we live in a fallen world, a world that has turned against Man, its formally crowned king. Droughts, hurricanes, tsunamis are part of this changed earth and we cannot blame any of this on God. He gave us free will because He wanted us to voluntarily accept His love; he gave us the possibility to choose, knowing that we can even make the wrong choice.

We shouldn’t understand this in a mechanical way however: I sin and I get sick, I do the right thing and I receive an immediate reward. It is not that simplistic. All we do however has consequences. As global warming may have an effect on the environment so our irrational cooling from God will have an influence on our climate, both physical and spiritual.

Man was not made immortal, but was given with the possibility to partake in the eternal existence of God. Only through his willful participation Man can achieve a life free of the turmoil of this fallen world. God’s initial intention was made even clearer through the incarnation of Christ. In Him all was renewed; the Adam of old was replaced by the New Adam that made the right choice for us, not isolated in a distant heaven, but by being one of us in the flesh.

Christ showed that this fallen nature is only temporary and though it is corrupted and filled with suffering and pain it is not all that is; it is not the goal, it is not the end. He showed that although we may die we can still live if we are in Communion with Him. He died and rose from the dead to show us how we can also rise from the fallenness of our nature and be not what we are now, but what God always intended us to be.

We live in a world that is not what it was supposed to be and periodically we suffer its mood swings. It is up to us to make the best out of it and work for our salvation in spite of the harshness of our environment. We are called to follow Christ and by our transformation in Him to change the entire cosmos. This time for better and for ever.