Taoism: remedy for a world in crisis? 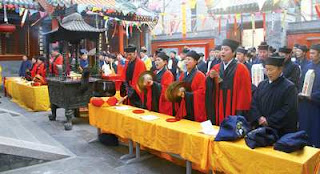 From environmental protection to crime prevention, Taoist priests, scholars and dignitaries on Tuesday called for building a harmonious world by using the ancient wisdom of Lao Tze, a Chinese philosopher who lived over 2,500 years ago.

During the three-day International Taoism Forum, which closed in central China's Hunan Province on Tuesday, about 500 delegates from more than 20 countries and regions, including China, the United States, France, Spain, Germany, Italy and Japan, exchanged thoughts on how to integrate Lao Tze's philosophy into modern society in an effort to solve existing problems such as war, terrorism and financial crises.

A declaration issued at the closing ceremony called on people around the world to "achieve serenity of body and mind, peaceable human relationships, environmental harmony and sustainable development," as conflicts grow rife and the natural world is disturbed due to the unchecked desires of man.

The 1,800-year-old religion of Taoism originated from Lao Tze's (BC 571-471) book "Tao Te Ching," in which he postulated that everything in the universe was born from emptiness and that balance and harmony should be achieved between human beings and nature.

Taoism was all but wiped out during the chaotic Cultural Revolution (1966-1976) and resumed after China's reform and opening-up to the outside world in the late 1970s. Recent statistics show that there are nearly 100,000 Taoist priests and over 5,000 Taoist religious sites on the Chinese mainland.

During the forum, religious figures and philosophical experts lashed out at the greed of modern people, saying that their behavior has led to natural degradation.

"The destruction of the natural environment -- often done today in the pursuit of wealth -- has gathered force in the past hundred years and is now like a runaway train," said Martin Palmer, secretary-general of the U.K.-based Alliance of Religions and Conservation.

"To me, the global financial crisis was caused by nothing other than the greed of Wall Street," said Liu Changle, board chairman and CEO of Hong Kong-based Phoenix Satellite Television.

Delegates also expressed concerns over moral degradation in Chinese society. Earlier this month, a two-year-old girl was ignored by 18 passersby after she was run over by two vans and left to bleed on a street in the city of Foshan in the wealthy southern province of Guangdong. The injured girl died in a hospital last Friday, sparking a nationwide debate on the country's moral standards.

"In a market economy, some people blind themselves with materialist desires and pursue nothing but profits. It is causing a moral, psychological and social crisis for China," said Professor Xu Kangsheng from the Department of Philosophy of Peking University.

"Many Chinese are occupied with pursuing fame and fortune, only to end up with an exhausted and uneasy mind," said Huang Zhijie, vice president of the Chinese Taoist Association.

Delegates called for promoting Taoist wisdom as a possible remedy, as the belief system holds that greed is the root of all hatred, killing and war.

"Taoism asks people to pursue a simple, but correct lifestyle, and to jettison excessive desires and choices," said Ge Rongjin, a philosophy professor from Renmin University

He said a return to Taoist tranquility could help people relax and calm their minds, allowing them to find the "right path."

Palmer said that to many in our contemporary world, extravagant wealth is the main goal and greed feeds on the desire to have the best of everything and to show it off to the rest of the world.

"But Taoism goes in the opposite direction. Simple living is the heart of the Taoist way of life. And it is a joyful simplicity," he said.

The forum, co-sponsored by the Chinese Taoist Association and the China Religious Culture Communication Association, is a continuation of the International Forum on Tao Te Ching held in Xi'an and Hong Kong in April 2007, bringing Taoists from all over the world to discuss their beliefs.

Nevertheless, compared with Buddhism, Christianity and Islam, Taoism has yet to develop into a global religion, although modern international communities are starting to realize the practical significance of Taoism and Lao Tze's thoughts.

The number of Taoist disciples in Europe and North America has been on the rise over recent years, with Taoist associations established in several countries, including the United States, France, Portugal and Italy.

Ong Seng Huat, director of the Taoist Culture Research Center in Malaysia, believes that Taoism should develop into a world religion because the Tao Te Ching and Lao Zi's thoughts had a "global perspective" from the very beginning, which has allowed Taoism to transcend countries, regions and races.

He suggested that Taoists should set up more organizations and engage themselves in more international talks and activities in order to contribute more to the international community.

"It is time for Taoism to grow. Because it can help not only people in China, but also people in the West," Trestard said.