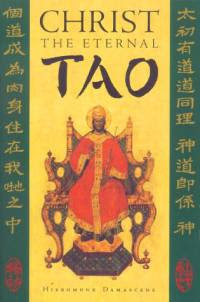 "In the beginning was the Tao,
and the Tao was with God
and the Tao was God....
And the Tao became flesh
and dwelt among us."
-John 1:1&18
"Taoism" is an ancient Chinese philosophy largely based on the book Tao Te Ching by Lao Tsu. Tao Te Ching is best translated "the virtue [te] of the Way [Tao]" or "the Way [Tao] and the virtue [te]." Lao Tsu means something like "Old Boy," and may or may not be intended as a real name. The first Western translation of Tao Te Ching was made by Jesuit missionaries in the late 1700's, and it has since been translated more times than any book except the Bible.

"Tao" literally means "Way" and its connotations are almost identical to the ancient Greek philosophers' "Logos" (word, reason). Like the Logos, Tao is the first principle or ordering pattern of the cosmos, of which ancient Greeks and Chinese had a similar view. Both the Greeks and Chinese refer to the first principle as a "mystery." The ultimate goal of the Taoist is eternal harmony with the Tao, or first principle. This harmony is attained by living in accord with nature and therefore the Tao, nature's source. The three "treasures" of Taoism are love, moderation, and humility/contentment.

Tao Te Ching is a fascinating book characterized by paradox, observation, intuition, and mystery. Lao Tsu teaches that the Tao is eternal, unchanging, simple, and has no material body, which means that no limited, human language can fully express its essence. The Tao is the principle of all things, because the Tao is the uncreated origin of heaven, earth, and the "myriad things." Because accord with nature brings harmony with the Tao, its origin, a natural course of human action and non-action are endorsed.

Common behavioral lessons include:
In general, Lao Tsu compares virtue to water. Water gives life to other things, flows in accord with nature, and resides in lowly places despised by men. It is profound and calm, gives itself to others freely, reflects truth, and does not go against nature. It is not hard or firm like rock, but its "weakness" is stronger than rock (e.g. in erosion). Water's adaptability to environment and conditions is also a "weakness" that is a strength.

In addition to lessons in personal virtue, Lao Tsu gives instruction on virtue in leadership (chiefly for government, but applicable to any leader).

Basic points on leadership include:

Two very good books on Taoism include Tao Te Ching by Lao Tsu (my favorite translation is John C. H. Wu's Tao Teh Ching, published by Shambhala) and The Tao Speaks: Lao Tzu's Whispers of Wisdom by Tsai Chih Chung (translated by Brian Bruya). The latter is written in a format similar to a comic book and makes Tao Te Ching clearer (it also has an index referring its own chapters to Tao Te Ching chapters).

You may, from this summary, think that there is nothing major in the teaching of Lao Tsu's Tao Te Ching which is substantially at odds with Christianity... and you would be correct. Taoism, like the ancient Greek philosophies of Heraclitus and Socrates, is essentially a natural philosophy which encourages harmony with nature and nature's eternal origin. St. John the Apostle, who was familiar with Greek philosophy by the time he wrote his Gospel, believed that God's revelation in Jesus Christ supernaturally fulfilled the natural Greek philosophy of the Logos (making perfect harmony with nature and the Logos possible). St. John began his Gospel, "In the beginning was the Logos, and the Logos was with God, and the Logos was God.... And the Logos became flesh and dwelt among us," (John 1:1&18). In Chinese Bibles, "Logos" is appropriately translated "Tao." The intuition of Heraclitus, Socrates, and Lao Tsu is fulfilled--Taoism is best viewed not as a philosophy opposed to Christianity, but one fulfilled in Christ, Who is the eternal Tao made flesh and revealed to all men!
at 03:47

Taoism is a big part of my practice and has greatly influenced Zen, which is the tradition within which I practice.

My favorite translation of the Tao Te Ching is by Stephen Mitchell. It is a pocket version too so it is great for traveling. :)

I bow to the Buddha within you all.