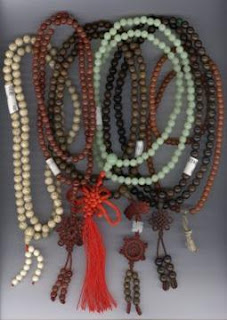 The rosary or prayer beads is a string of beads for keeping count of prayers. It can also be a set of prayers said with the help of beads. The Buddhist rosaries are common, but few know the significance of them. Abbots of Mahayana Temples wear them around their neck as part of their regular official costume. Elderly nuns or monks can be seen holding one in their hands or coiled around their wrist. The use of the rosary is regarded as a religious exercise. Thus the rosary is also regarded as a religious item and should be treated with care and reverence, just as we respect the holy books. There are three major groups of rosary, the eastern rosary, the middle-eastern rosary, and the western rosary.

Traditionally eastern rosary has 108 beads. The eastern rosaries are used by Buddhists, Hindus and some other traditions of the Indian and the Oriental sub-continents. The origin of the Buddhist Rosary goes back to Shakyamuni Buddha's time. In the scripture, King Haruri said to Buddha, 'Our country is very poor. On top of that we have disputes and epidemics spreading, so that few can afford the luxury of ascetic practice.' The Buddha replied, 'If you make a ring with 108 seeds from a linden tree ( Tilia spp.) and meditate by reciting the Buddha's name, then it is indeed a good gesture of practice.

The middle-eastern rosary has 99 beads. These rosaries are used by the Eastern Orthodox Christians and the Muslims. The Muslims use the rosary called Subha (to exalt) for the purpose of dikir , the repetition of the Name of God (Allah), who has 99 revealed names and a hundredth which He keeps to Himself. Each bead represents a prayer, which might be the Tahmid (God be Praised) or the Tahlit (There is no God but Allah ). Orthodox Christians use it to repeat “ Kyrie Eleison” meaning "Lord, have mercy", or the name of Jesus in a formula known as the Jesus Prayer. They say it 99 times as a multiple of three for the Triune God (Holy Trinity).

The western rosary, also called the Christian rosary has 150 beads. They are used by the Roman Catholic and some of the Protestant Churches. The Christian rosary seems to have begun as a lay person's substitute for the monastic duty of chanting the 150 Psalms. Catholics may use the Rosary, also called "Psalter" and "Chaplet" to repeat the name of Holy Mary or, “ Ave Maria ” in Latin, a 150 times, This prayer is called the Aves. Other Christian Rosary prayers are “Hail Mary” and “Our Father”.

From references, early rosary was a string with the required number of knots on them. Beads of various kinds were later used as a replacement for the knots. Beads were also use as very early counting equipments, one such well known example is the abacus. The English word rosary comes from the Latin word “rosarium” which means a rose-wreath or a rose-garden . The Chinese call the rosary “Fo Chu” or Buddha's Pearls. The Japanese call them Nenju and the Indians call them Mala. Mala is a Sanskrit as well as Pali word meaning "wreath". In essence, the Buddhist rosary is used for remembering or developing mindfulness, whence its name Nenju (mindfulness beads) in Japanese.

Rosaries are used to enumerate prayers. The Buddhist rosary typically consists of one-hundred-eight beads. The number 108 is explained in many different ways. One source explains the number one-hundred-eight as equal to the number of mental conditions or desires that the supplicant must overcome in order to escape Samsara , the cycle of rebirth. Another interpretation is that the user will receive many virtues. The ancient Chinese and Indians were excellent mathematicians and 108 may be the product of a precise mathematical operation, which was thought to have special numerological significance. Whatever the reason, 108 has been a sacred number in the Oriental and Indian sub-continents since the early days. The number 108 is so revered that it is sometimes used in buildings, such as 108 pillars in some temples, and in daily life some Tibetan women may plait their hair in 108 knots.

Today one can get Buddhist Rosaries with a varied number of beads, usually in a multiple of 108 or a dividend of 108. I have seen a rosary with 216 beads, double the 108 traditional beads on a rosary. There are also half rosaries with 54 beads where a user would chant two round of a half rosary to complete the 108 repetitions. Then there are wrist rosaries with 27 beads, where a user would chant four rounds to complete the 108 repetitions. These should not be mistaken for the modern wrist bands consisting of an indeterminate number of beads strung on elastic, and worn on the wrist as a reminder that one is a follower of the Dharma.
at 08:03