Comparison of Buddhism with Christianity 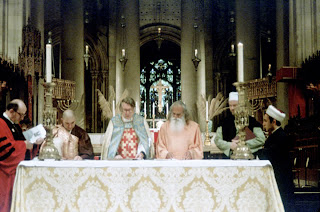 Since about 75% of American adults identify themselves as Christian and only 0.5% view themselves as Buddhist, it may be useful to compare Buddhism with the U.S.'s dominant religion.

We define as "Christian" any person or group who thoughtfully, sincerely, prayerfully regard themselves as Christian. This is the definition that pollsters and the census offices of many countries use. It includes as Christians the full range of faith groups who consider themselves to be Christians, including Assemblies of God members, Presbyterians, Roman Catholics, Southern Baptists, United Church members, Jehovah's Witnesses, Mormons, etc. Many Christians have a much less inclusive definition of the term "Christian."
Some shared beliefs: Buddhism and Christianity share some features:

Two quotations from Buddhist texts which reflect this Ethic are:

"...a state that is not pleasing or delightful to me, how could I inflict that upon another?" Samyutta Nikaya v. 353.

"Hurt not others in ways that you yourself would find hurtful." Udana-Varga 5:18.

This compares closely to Christianity's Golden Rule, which is seen in:

"Therefore all things whatsoever ye would that men should do to you, do ye even so to them." Matthew 7:12.

Buddhism teaches that humans are trapped in a repetitive cycle of birth, life, death and rebirth. One's goal is to escape from this cycle and reach Nirvana. Once this is attained, the mind experiences complete freedom, liberation and non-attachment. Suffering ends because desire and craving -- the causes of suffering -- are no more.

Christianity has historically taught that everyone has only a single life on earth. After death, an eternal life awaits everyone: either in Heaven or Hell. There is no suffering in Heaven; only joy. Torture is eternal without any hope of cessation for the inhabitants of Hell.

Beliefs shared by some Buddhist traditions and Christianity: