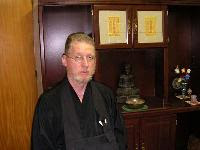 The Lotus Meditation Center is led by Fa Jiàn MelChiZeDek. He was born and raised in Europe before moving to America. His degrees are in Philosophy, Theology and Montessori pedagogy. Fa Jiàn's academic areas of most interest are Eastern spirituality, linguistics and education. He has served as a Christian minister for over three decades before retiring and teaching Zen.

"My master made a point of telling me early in my work with him that all religions are the same. They are all about being human and recognizing our fundamental nature – call it God, enlightenment or Buddha nature, true, inner being, and such. That is all the same. The differences are only at the conceptional level, i.e. in the relative. At the non-conceptional, mystic level, i.e. in the absolute, there are no differences at all. Once someone truly finds this “God” – it validates any religion that led there."

Over time, Fa Jiàn has facilitated study groups in Lao Tzu and was trained in Zen meditation by various teachers since 1998. Fa Jiàn received the Precepts from the Chinese Zen Buddhist Order of Hsu (Xu) Yun by Abbot Chuan Zhi in the lineage of Hsu Yun.
at 09:04