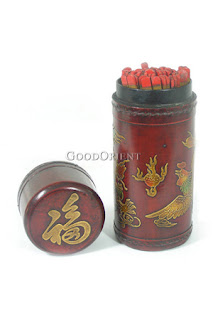 Kau Cim is a Chinese fortune telling practice of requesting answers from the sacred oracle lot. It is a practice that originated in China and sometimes known as "Oracle of Guan Yin" in Buddhist traditions. It is based on the Book of Changes (I Ching, Yijing). Although not strictly the name of the practice itself, Kau Cim is often referred to as Chien Tung, or informally as Fortune Sticks by westerners.

The prediction begins with the cup storing a number of the sticks. The querent thinks silently or whispers it to the deity about their question. This part needs to be done decisively as one should not shift questions or hesitate on the question in the middle of the routine. The shaking of the cylinder results in at least one stick leaving the cylinder and being dropped onto the floor. In most cases, if multiple sticks leave the cylinder, those fortunes would not count. Each stick, each with a designated number, represents their answer. Answers can be consulted by a temple priest or can be interpreted by strips of paper with answers in correspondence to their number on the stick that read their fortune.

Once a single stick jumps out, that stick will have a number on it that will correspond to a number (1 - 100) on a answer paper. The writing on the piece of paper will provide an answer to the question. Interpretation maybe needed to comprehend the answer.

In many cases, an offering is made prior to the asking of the question in order to carry good favor from the higher powers. These offerings typically consist of incense, fresh fruits, cakes, a roasted pig or fowl, or cash donations.

The stick result is analyzed by an interpreter, who has a book of Chinese poetic phrases and stories. The interpretation is generally short ranged, typically covering no more than one year, using Chinese New Year as the starting point. The interpreter typically charges a small fee. Often, interpreters provide other services such as palm or face reading.

Because the accuracy of the prediction very much depend on the interpreter, some people run the result through a number of different interpreters to see whether similar results are drawn. The interpreted answer is usually a historical Chinese story re-told in modern sense. The story is basically the forthcoming event the querent is about to experience.
at 16:49