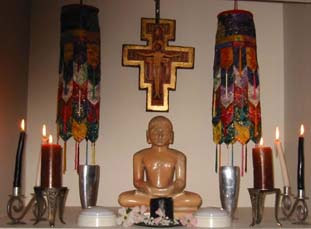 The two religious galaxies of Christianity and Buddhism begin, not to collide, but intersect and occupy the same space. This poses a challenge for Christianity that is comparable to its meeting with Greek thought or with the natural sciences. (1) How Zen might interact with Catholicism is one aspect of this larger encounter, and one we can look at under three different headings: Zen and western Catholics, Zen and oriental Catholics, and Zen Buddhism and Catholicism.

A road has been opened up for a Catholic understanding of Zen by men like Heinrich Dumoulin, H.M. Enomiya LaSalle, William Johnson and Thomas Merton. Where does it lead? Where does it go once we see that Catholics can appreciate and practice Zen? What will happen when Catholics begin to attain enlightenment? It is then that it will be crucial for us to understand as clearly as possible the differences between Zen enlightenment and the ultimate goal of Christian life, and the different inner horizons that distinguish the Catholic from the Zen Buddhist.

For the Catholic, enlightenment is an absolute only in a particular order. It is not an absolute absolutely, which is reserved for union with God through love. But if Catholics begin to advance on the way of enlightenment under the guidance of Zen Buddhists, then it is possible that they will feel a tension between these two different ways of looking at enlightenment. Having gone through the gateless gate, how readily can they come forth and understand this experience, not in the traditional categories of Zen Buddhism, but within the perspectives of faith? How transparent will enlightenment be to divine union? How much will it capture the Catholic by its deep actuality and bedazzle him so he will have great difficulty in reflecting on this experience in a Christian way, especially since Christian reflection on Zen enlightenment has just begun?

The more a Catholic penetrates deeply in Zen the more will he have to ponder these questions, be aware of their potential dangers and strive to overcome them in order that the riches of Zen will flow into Catholic life.

When will the day come when we have a distinctive Indian, Chinese or Japanese Catholicism? Catholicism is no more intrinsically Greek than Japanese. It is the task, immensely difficult and exciting, of oriental Catholics to create a Buddhist Catholicism or Zen Catholicism. This can take place if we can see the inner nature of enlightenment, and see that it not only does not conflict with faith, but is a beautiful creation of men and women who share an identical longing with Christians for the Absolute. Then Catholics could take up this age-old work of people called to grace and illuminate it with the treasures of their own faith while this very faith becomes enriched by a new understanding.

If Catholics can turn to Zen, is it impossible to imagine Zen Buddhists becoming Catholics? This would demand that Catholics carefully articulate their own metaphysical and mystical traditions and show that they are not antithetical to the heart of Zen. But could a call to faith appear in the very midst of enlightenment? And could it not already be doing so in certain cases? John of the Cross describes how when a ray of light enters a dark room, if there is dust in the air the light becomes visible, and if the air is pure the light is not seen. He uses this example as a way of describing the rare contemplative state in which the light of contemplative union strikes an exceptionally purified spirit and plunges it into forgetfulness. (2) What of the inner mind and heart of those men and women who have forsaken all things and attained to this night luminous with existence? What hidden longings remain in the midst of enlightenment calling out to some unimaginable depth? And if contemplative union would begin to dawn, how could it be spoken of or known in the ordinary sense of the term? And if such a person could sense this calling, and in some cases its fruition, and then see that the Gospel was nothing else but the explicitation of this inner mystery, would becoming a Catholic be a betrayal of Zen or its crown? None of this implies that right now the Zen Buddhist is any less close to God than Catholics, for God calls all people to Himself and is the judge of how they respond. But if God has revealed Himself and calls out in the very midst of enlightenment, then imagine the Zen-Catholicism that would be born if this call were heard.

DISTINGUISH IN ORDER TO UNITE

Whatever has been said in the past chapters is but one step on this journey. The cultivation of the intuition of being becomes not just a metaphysical problem, but involves our whole self and its longing for the Absolute. It is only when we reach for the highest goal that we create the most ample interior space in which a genuine metaphysics can be born. This reaching, known to both Zen and Christian mysticism, provides the necessary complement to my remarks on the cultivation of the intuition of being.

We cultivate the intuition of being by pursuing our deepest inner aspirations that transcend metaphysics itself. The more we situate Zen in this ascent, the better able we will be to let it inspire both metaphysics and Christian mysticism, and be inspired by them in turn. Each is enamored by existence in its own way. The metaphysics of St. Thomas wants to understand it, and to do so, it uses concepts and pushes them to their ultimate limits where they display their innermost nature as reflections of existence. Zen wants to actively embrace existence so it resolutely puts aside all concepts, and in this emptiness finds the way to existence. Christian mysticism wants to be embraced by existence and see revealed in its depths its most intimate face, which is love. There is no reason except our own weakness that prevents all three from sharing with each other the riches they have found in the service of this one Existence, or Nothingness.

Excellent as always!
I would just like to add that being a Gnostic priest that celebrates mass that is very similar to the Catholic mass I often go to the local Catholic Church for mass.
Upon having our Lama come over to bless our Buddhist Shrine Room that is in our home, he noticed my many crosses and Holy Water font and a few other items. When my husband had gone down stairs and the Lama and I were still talking he recommended that I put one of my crosses on my altar next to my husband's statue of Buddha.
I thought about it for a few days and chose to place it on my Chenrizi altar instead of the main altar with Buddha. I have an entire Chapel in my home so this had not really seemed necessary in the past but I must admit it feels right having it there. I am now looking to find a nice statue of Prajnaparamita for my Gnostic Chapel.
As Buddhism in its many forms spreads through out the west many of the practices are being incorporated in to the lives of westerners that are non Buddhist. I have many Catholic friends that practices Zen meditation for example. On the other side of that I hear more and more Buddhist speaking of how The Blessed Virgin Mary and Mother Teresa and other are emanations of Tara. I would not be at all surprised to see the iconography of Tara changing in the west over the next few centuries to reflect this thought.
For the Gnostic there is no difference between Zen and Catholicism, only the outer practices of each sect is different.