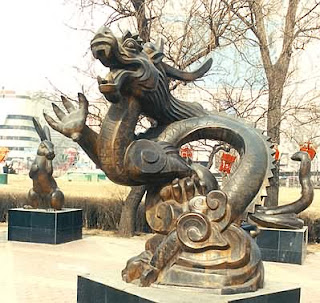 Chinese folk religion is composed of a combination of religious practices, including Confucianist ceremonies, ancestor worship, Buddhism and Taoism. Chinese folk religion also retains traces of some of its ancestral neolithic belief systems which include the veneration of (and communication with) the sun, moon, earth, the heaven, and various stars, as well as communication with animals. It has been practiced alongside Buddhism, Confucianism, and Taoism by Chinese people throughout the world for thousands of years.
Ceremonies, veneration, legends, festivals and various devotions associated with different folk gods/deities and goddesses form an important part of Chinese culture even today. The veneration of secondary gods does not conflict with an individual's chosen religion, but is accepted as a complementary adjunct to Buddhism, Confucianism or Taoism. Some mythical figures in folk culture have even been integrated into Buddhism as in the case of Miao Shan who is generally thought of having evolved into the Buddhist bodhisattva Kuan Yin. Other folk deities may date back to pre-Buddhist eras of Chinese history. The Chinese dragon is one of the key religious icons in these beliefs.

There are hundreds of gods and goddess as well as "saints," immortals and demigods. Historical figures noted for their bravery or virtue are also venerated and honored with their own festivals after they are apotheosized. The following list represents some commonly worshiped deities:
(Note: This list is incomplete and should not be considered a full representation)