Holy Maya, Mother of Buddha, Have Mercy on Us 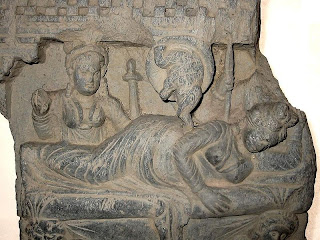 Queen Māyā and King Suddhodhana did not have children for twenty years into their marriage. One day however, according to legend, Queen Māyā dreamt of a divine Bodhisattva on white elephant touching her side, and became pregnant. According to Buddhist tradition, the Buddha-to-be was residing as a Bodhisattva, in the Tuṣita heaven, and decided to take the shape of a white elephant to be reborn, for the last time, on Earth. Māyā gave birth to Siddharta c. 563 BCE. The pregnancy lasted ten lunar months. Following custom, the Queen returned to her own home for the birth. On the way, she stepped down from her palanquin to have a walk in the beautiful flower garden of Lumbini Park, Lumbini Zone, Nepal. She was delighted by the park and she reached for a branch to take a rest. Again according to legend, at this time Prince Siddhārtha emerged from her right side and was born. It was the eighth day of April. She gave him his first bath in the Puskarini pond in Lumbini Zone. Siddhārtha means "He who has accomplished his goals" or "The accomplished goal".

Queen Māyā died seven days after the birth of the Buddha-to-be, and went to the Tuṣita Heaven. Her sister Prajāpatī (Pāli: Pajāpatī or Mahāpajāpatī Gotamī) became the child's foster mother.

After Prince Siddhartha had gained perfection and became the Buddha, he visited his mother in heaven for three months to pay respects and to teach the Dharma.