Religious Altars in Temples and Homes 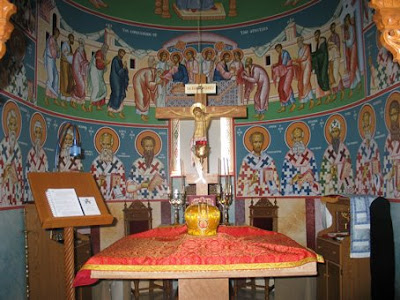 In Hinduism, altars are also shrines to the gods, and therefore sacred. Offerings and sacrifices are made at these shrines, to the gods. A large shrine is found in the temple, or mandir, while smaller ones are found in the home. A Hindu shrine consists of images of the gods called murtis, and offerings to that god. There is usually also lights, pictures of saints and gurus, and offerings, often of food.

Taoist altars are erected to honor traditional deities and the spirits of ancestors. Taoist altars may be erected in temples or in private homes. Strict traditions describe the items offered and the ritual involved in the temples, but folk custom in the homes is much freer.

Nearly all forms of Chinese traditional religion involve baibai (拜拜)--bowing towards an altar, with a stick of incense in one's hand. (Some schools prescribe the use of three sticks of incense in the hand at one time.) This may be done at home, or in a temple, or outdoors; by an ordinary person, or a professional (such as a Daoshi 道士); and the altar may feature any number of deities or ancestral tablets. Baibai is usually done in accordance with certain dates of the Chinese lunar/solar calendar.

At certain dates, food may be set out as a sacrifice to the gods and/or spirits of the departed. (For example, Qingming Festival and Ghost Festival.) This may include slaughtered pigs and ducks, or fruit. Another form of sacrifice involves the burning of Hell Bank Notes, on the assumption that images thus consumed by the fire will reappear--not as a mere image, but as the actual item--in the spirit world, and be available for the departed spirit to use. In Taoist folk religion, sometimes chickens, pigs feet, and pig heads are given as offerings. But in orthodox Daoist practice, offerings should essentially be incense, candles and vegetarian offerings.

In Buddhism, a butsudan is an altar found in temples or homes. The butsudan is a wooden cabinet with doors that enclose and protect a religious image of the Buddha or the Bodhisattvas (typically in the form of a statue) or a mandala scroll, installed in the highest place of honor and centered. The doors are opened to display the image during religious observances. A butsudan usually contains subsidiary religious items—called butsugu—such as candlesticks, incense burners, bells, and platforms for placing offerings such as fruit. Some buddhist sects place "ihai," memorial tablets for deceased relatives, within or near the butsudan. Butsudans are often decorated with flowers.

The shrine is placed in the temple or home as a place of worship to the Buddha, the Law of the Universe, etc. Scrolls (honzon) or statues are placed in the butsudan and prayed to morning and evening. Zen Buddhists also meditate before the butsudan.

The original design for the butsudan began in India, where people built altars the size of skyscrapers as an offering-place to the Buddha. When Buddhism came to China and Korea, statues of the Buddha were placed on pedestals or platforms. the Chinese and Koreans built walls and doors around the statues to shield them from the weather. They could then safely offer their prayers, incense, etc. to the statue or scroll without it falling and breaking.

When the Japanese finally welcomed Buddhism after many years of Shintoism, they took in the religion along with the butsudan. As many new Buddhist sects came into being, the butsudan was placed in many temples. The Japanese took the plain walls and doors of the mainland shrines and elaborately embellished them, and the butsudan became the focal point of every temple. As time went on, people began installing butsudans into their homes.

In Shinto, altars are found in shrines. Originating in ancient times, himorogi are temporarily-erected sacred spaces or "altars" used as a locus of worship. A physical area is demarcated with branches of green bamboo or sakaki at the four corners, between which are strung sacred border ropes (shimenawa). In the center of the area a large branch of sakaki festooned with sacred emblems (hei) is erected as a yorishiro, a physical representation of the presence of the kami and toward which rites of worship are performed.

In more elaborate cases, a himorogi may be constructed by placing a rough straw mat upon the ground, then erecting a ceremonial eight-legged stand (hakkyaku an) upon the mat and decorating the stand with a framework upon which are placed sacred border ropes and sacred border emblems. Finally the sakaki branch is erected in the center of this stand as the focus of worship.

In Neo-Paganism there is a wide variety of ritual practice, running the gamut from a very eclectic Syncretism to strict Polytheistic reconstructionism. Many of these groups make use of altars. Some are constructed merely of rough-hewn or stacked stone, and some are made of fine wood or other finished material.

In Nordic Neo-Pagan practice, altars may be set up in the home or in wooded areas in imitation of the Hörgr of ancient times. They may be dedictated to Thor, Odin, or other Nordic deities.

A basic altar, called a Hörgr was used for sacrifice in Norse paganism. The Hörgr was constructed of piled stones, possibly in a wood (harrow), and would be used in sacrifices and perhaps other ceremonies as well.

A possible use of the hörgr during a sacrifice would be to place upon it a bowl of the blood of an animal sacrificed to a Norse deity (e.g. a goat for Thor, a sow for Freyja, a boar for Freyr), then dipping a bundle of fir twigs into it and waving the bundle in the form of the "hammer-sign" to spatter the participants with the blood. This would consecrate the attendees to the ceremony, such as a wedding.

The word "altar" (Greek: θυσιαστήριον) appears twenty-four times in the New Testament. Significantly, Hebrews 13:10 spoke of Christians having an altar of which those who follow the Jewish liturgy could not partake, a reference, it seems, to the Eucharist and the table/altar used by the early Church. In early and later Catholic theology it is a re-presentation, in the literal sense of the one sacrifice being made "present again." Hence, the table upon which the Eucharistic meal (the Bread and the Wine) is also called an altar.

Altars occupy a prominent place in the sanctuaries of many churches, especially those belonging to the ancient Christian traditions, such as the Roman Catholic, Anglican, Eastern Orthodox, Oriental Orthodox and Assyrian Churches. They are also found in many Protestant worship places. It plays a central role in the celebration of the Eucharist. A priest celebrates at the altar, on which the bread and the wine are placed.

The area around the altar is seen as endowed with greater holiness, and is usually physically distinguished from the rest of the church, whether by a permanent structure such as an iconostasis, a rood screen or altar rails, by a curtain that can be closed at more solemn moments of the liturgy, as in the Armenian Church, or simply by the general architectural layout. The altar is often on a higher elevation than the rest of the church. In Reformed and Anabaptist churches, a table, often called a "communion table", serves an analogous function. In some colloquial usage, the word "altar" is used to denote the altar rail also, although this usage is technically incorrect.

Architecturally, there are two types of altars: those that are attached to the eastern wall of the chancel, and those that are free-standing and can be walked around, for instance when incensing the altar.

In the earliest days of the Church, the Eucharist appears to have been celebrated on portable altars set up for the purpose. During the persecutions, the Eucharist was celebrated among the tombs in the catacombs, using the sarcophagi of martyrs as altars on which to celebrate. It is thought to be the origin of the tradition of placing relics beneath the altar.

When Christianity was legalized under Saint Constantine the Great, formal church buildings were built in great numbers, normally with free-standing altars in the middle of the sanctuary. Although in the days of the Jerusalem Temple the High Priest indeed faced east when sacrificing on Yom Kippur, the sanctuary within which he stood was located at the western end of the Temple. The Christian replication of the layout and the orientation of the Jerusalem Temple helped to dramatize the eschatological meaning attached to the sacrificial death of Jesus the High Priest in the Epistle to the Hebrews." The ministers (bishop, priests, deacons, subdeacons, acolytes), celebrated the Eucharist facing east, towards the entrance. After the sixth century the contrary orientation prevailed, with the entrance to the west and the altar at the east end. Then the ministers and congregation all faced east during the whole celebration; in the Middle Ages of Western Europe altars began to be permanently placed against the east wall of the chancel.
at 12:48