The Story of Spring Festival 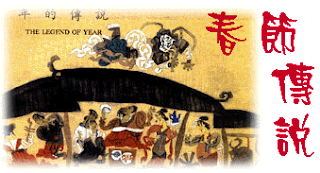 Tradition has it that in ancient China there was a monster named “Year” with long tentacles on its head that was extremely ferocious. “Year” generally lived deep down on the ocean floor, climbing to the shore only on the Lunar New Year to devour livestock and people.

Because of this, every year on that day, people of every village, the old and the young alike, would flee to remote mountains to avoid being attacked by the beast.

This New Year’s Day, as the people of Peach Blossom Village were escorting the old and young to the safety of the mountains, an old man with a silvery beard and eyes that seemed to be sparkling came begging, his frame resting on a single walking-stick and his arms carrying a sack.

Some people in the town were sealing up their windows and doors, others were cleaning and preparing for the journey, still others were herding their livestock; the chaotic sounds of bustling, panicked people and horses were everywhere. No one thought to look after this old beggar.

An old granny from the town’s east end was the only person to give the old man a bite to eat and urge him to head up the mountain and avoid the beast. The old man smiled, stroking his beard, and said, “Granny, if you let me stay in this house for one night, I’m sure I can drive this ‘Year’ beast away.”

The old woman was shocked; looking closer she saw the beggar’s frame was hearty, that he looked spirited and poised. But when she continued to advise the man to go up the mountain, he simply smiled, saying nothing. The old lady felt it was hopeless; out of necessity she left her house and took asylum in the mountains.

At midnight, the “Year” monster burst into the village. He discovered that the scene was different than in years past; in the grandmother’s house on the east side of the village red strips of paper were pasted around the doorway, and inside the room a lone fire glowed brightly. The monster trembled, and let out a strange scream.

“Year” glared at the woman’s house for a moment, then screamed madly towards it. When he neared the doorway, the sudden “Bang! Pow!” of explosions filled the air. “Year” quivered and shook, unwilling to approach the house again.

As a matter of fact, the things “Year” feared the most were the color red, bright flames, and the sound of explosions. The door to the old woman’s house burst open, and in the doorway stood a man wrapped in a red cloak, laughing uproariously. “Year” turned pale with fright and helplessly jumped upwards.

The next day was the first of the new year; as the people hiding in the mountains returned to their homes they were shocked to see that everything in the village was safe and sound. Suddenly, the old grandmother realized what had happened, and hastily told the other villagers of the old beggar’s promise.

Everyone crowded towards the old woman’s home, all they could see were the red paper strips, some unburned bamboo still exploding “bang!” in the courtyard, and a red candle still flickering inside the room…

The villagers were wild with joy, to celebrate this auspicious event they put on new clothes and hats and visited the homes of their friends and family to share congratulations. This news spread quickly through the surrounding villages; soon everybody knew the way to banish the “Year” monster.

From then onward, every year on New Year’s Eve every family puts up red scrolls, sets of firecrackers, and keeps candles brightly lit, keeping watch during the night. When dawn comes, they still go to the houses of friends and family and exchange congratulations. This custom continued to spread and grow as it was passed down, and became Chinese people’s most important traditional festival.

Although traditions of celebrating the new year through sacrifices to the gods and ancestors may have started as early as the Shang dynasty (roughly 1600 B.C.E.-1000 B.C.E.), when the new year officially began doesn’t appear to have been fixed formally until the Han Dynasty (206 B.C.E.–220 C.E.). The tradition of writing couplets on red paper for the festival began in the Ming Dynasty (1368–1644 C.E.)and the tradition of posting 福 (happiness) on the door is from the Song Dynasty (960-1279 C.E.) or earlier. The tradition of spending New Year’s eve with ones family comes from the Wei-Jin period (220-420 C.E.)
at 09:26

it would be nice if you made some note in your post to indicate that the entire post is just copied from my site and the translation is not your own.

He always links to the source for credit. Almost everything here is from other site and each title is a link to the original source, just a different way of giving credit than what we are used to I guess.