Gong Fu Cha and the Tao of Tea 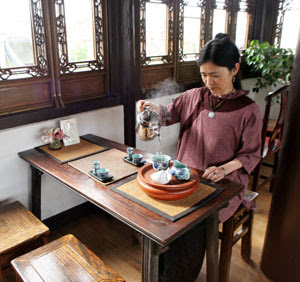 The earliest book on tea was written by Lu Yu between 760 CE and 780 CE (Tang Dynasty). The Classic of Tea: Origins & Rituals

introduces the concepts of tea as a symbol for the harmony and mysterious unity of the universe.

In China, tea was first introduced as a medicine to the common people, becoming part of Daoism which expresses the unity of human beings and the natural world. By weaving tea into a way of life, one combines the material and human spirit of the universe. When tea became part of the royal family, its qualities became ceremonious and tea came to mean harmony, calm, etiquette and wisdom (Confucius). When tea became part of monastery life for Buddhist monks, tea acquired the qualities of meditation and purity. So, for Chinese, tea is not just tea, it is a combination of Chinese Daoism, Confucianism, and Buddhism.

In China, tea is a social process, a custom which involves not just the herbal or medicinal values of tea but social engagement. Guests are always served tea, no matter the time of day. Accompanying the tea are small dishes to enhance the tea and stimulate conversation among friends or guests. Besides just drinking tea, tea leaves are appreciated for flavor and texture and tea liquid is used to infuse cuisine with color, flavor and texture. Try marbled tea eggs in a teahouse for a sample. Teahouses became popular in the Ming Dynasty and became a place for small performances of music, play or song.
at 12:31