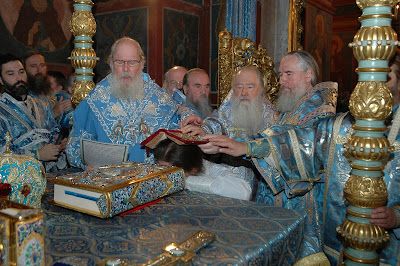 Apostolic succession (Hebrew: האפיפיור הירושה‎, Greek: Αποστολική διαδοχή) is a doctrine, held by Christian denominations, which asserts that the chosen successors (properly ordained bishops) of the Twelve Apostles, from the first century to the present day, have inherited the spiritual, ecclesiastical and sacramental authority, power, and responsibility that were conferred upon them by the Apostles, who in turn received their spiritual authority from Jesus Christ.

Present-day bishops, as the successors of previous bishops, going back to the early days of Christianity, have spiritual and ecclesiastical power by this unbroken chain of ordinations stemming from the Apostles. This link with the Apostles guarantees for them their authority in matters of faith, morals and the valid administration of sacraments. This is reaffirmed every Sunday in the reciting of the Nicene Creed by priests and congregants, with the words, "We believe in one holy and catholic and apostolic Church..." Essential to maintaining the apostolic succession is the proper consecration of bishops.

Apostolic succession "is one of four elements which define the true Church of Jesus Christ" and legitimizes the sacramental offices, as it is considered necessary for a bishop to perform legitimate or "valid" ordinations of priests, deacons and other bishops. Apostolic succession is transmitted during episcopal consecrations (the ordination of bishops) by the laying on of hands of bishops previously consecrated within the apostolic succession. This lineage of ordination is traceable, according to "Apostolic" churches, to the original Twelve Apostles, thus making the Church the continuation of the early Apostolic Christian community.

Within the sacramental theology of these churches, only bishops and presbyters (priests) ordained by bishops in the apostolic succession can validly celebrate or "confect" several of the other sacraments, including the Eucharist, reconciliation of penitents, confirmation and anointing of the sick. To those who claim it, apostolic succession is an important dividing line: the lack of it is the primary basis on which Protestant communities are not considered churches by the Orthodox churches and the Roman Catholic Church.

Eastern Orthodox theology and ecclesiology teach that each bishop is equal to the other bishops, even the Ecumenical Patriarch, who is first amongst equals. As a general rule, Protestantism rejects most traditional Christian doctrines, including apostolic succession.

It is worth noting, however, that the First Epistle of Clement which is commonly dated to the 1st century and claims to be written by the Roman Church which was established by the Apostles, suggests a belief in apostolic succession, as does also the Epistles of Ignatius of Antioch, who was a personal disciple of the Apostles John and Paul. Also worth noting is the fact that others besides the twelve Apostles and Saint Paul are called "Apostles" in the New Testament. Also noteworthy is that the Apostle Paul, though given spiritual authority directly by Christ, did not embark on his apostleship without conferring with those who were apostles before him as he notes in his Epistle to the Galatians.

The New Testament definitely implies a personal apostolic succession (from Paul to Timothy and Titus, for example) and which states that Jesus gave the Apostles a "blank check" to lead the Church as they saw fit under the guidance of the Holy Spirit. They appeal as well to other documents of the early Church, especially the Epistle of St. Clement to the Church at Corinth, written around 96 AD. In it, Clement defends the authority and prerogatives of a group of "presbyters" or "bishops" in the Corinthian Church which had, apparently, been deposed and replaced by the congregation on its own initiative. In this context, Clement explicitly states that the apostles appointed bishops as successors and had directed that these bishops should in turn appoint their own successors; given this, such leaders of the Church were not to be removed without cause and not in this way. Further, the universal practice of the undivided early Church was one of apostolics succession.

At the same time, no defender of the personal apostolic succession of bishops would deny the importance of doctrinal continuity in the Church. The Church holds that Christ entrusted the leadership of the community of believers, and the obligation to transmit and preserve the "deposit of faith" (the experience of Christ and his teachings contained in the doctrinal "tradition" handed down from the time of the apostles, the written portion of which is Scripture) to the apostles, and the apostles passed on this role by ordaining bishops after them. Catholic and Orthodox theology additionally holds that the power and authority to confect the sacraments, or at least all the sacraments aside from baptism and matrimony are passed on only through the sacrament of Holy Orders, and an unbroken line of ordination of bishops to the Apostles is necessary for the valid celebration of the sacraments today. Roman Catholics recognize the validity of the apostolic successions of the bishops, and therefore the rest of the clergy, of the Eastern Orthodox, Oriental Orthodox, Assyrian, Old Catholic (Union of Utrecht only). Neither the Catholic Church nor the Orthodox churches recognizes the validity of the apostolic succession of the clergy of the Protestant denominations, in large measure because of their theology of the Eucharist and the abandonment of more traditional views of Christian theology, the Bible, the sacraments, and sacramentalism.

The early Nicene Creed of the Church, in the form given to it by the First Council of Constantinople, affirms that the Church is "one, holy, catholic, and apostolic". Of these "four marks" of the true Church, the "apostolic" mark has historically been understood principally as a reference to apostolic succession. The literature on this traditional doctrine is substantial. Many inferences have been drawn from it. For example, the unbrokenness of apostolic succession is seen as significant because of the promise made by Jesus Christ that the "gates of hell" (Matthew 16:18) would not prevail against the Church, and his promise that he would be with the apostles to "the end of the age".[Matthew 28:20] According to this interpretation, a complete disruption or end of such apostolic succession would mean that these promises were not kept. The same would be true if an intact apostolic succession should completely abandon the teachings of the apostles and their immediate successors. An abandonment hypothetical example might imagine all the bishops of the world agreeing to abrogate the Nicene Creed or to repudiate the Bible.

Some Eastern Christians hold that the Western papal Catholic Church lost all claim to apostolic succession by an illegitimate addition of the Filioque clause to the Nicene Creed incorporated by the Western church, which began with the teachings of Augustine. They see the rift as resulting in the loss of apostolic succession in the western churches.

Papal primacy is different though related to apostolic succession as described here. The Catholic Church has traditionally claimed a unique leadership role for the Apostle Peter, believed to have been named by Jesus as head of the Apostles and as a focus of their unity, who became the first Bishop of Rome, and whose successors accordingly became the leaders of the worldwide Church as well. Even so, Catholicism acknowledges the papacy is built on apostolic succession, not the other way around. As such, apostolic succession is a foundational doctrine of authority in the Catholic Church.

Orthodox Christians view apostolic succession as an important, God-ordained mechanism by which the structure and teaching of the Church are perpetuated. While Eastern Orthodox sources often refer to the bishops as "successors of the apostles" under the influence of Scholastic theology, strict Orthodox ecclesiology and theology hold that all legitimate bishops are properly successors of Peter. This also means that presbyters (or "priests") are successors of the apostles. As a result, Orthodox theology makes a distinction between a geographical or historical succession and proper ontological or ecclesiological succession. Hence, the bishops of Rome and Antioch can be considered successors of Peter in a historical sense on account of Peter's presence in the early community. This does not imply that these bishops are more successors of Peter than all others in an ontological sense.

According to ancient canons still observed with the Orthodox communion, a bishop must be consecrated by at least three other bishops; so-called "single handed ordinations" do not exist. Moreover, bishops are never ordained "at large" but only for a specific Eucharist community, in due historical and sacramental succession.