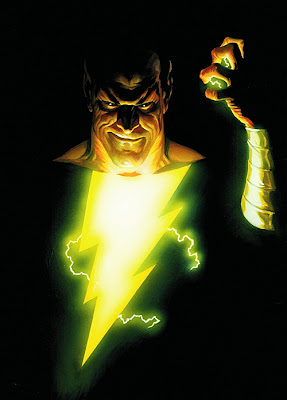 's story begins with the young boy who would one day be known as the wizard Shazam. Shazam was born as Jebediah, in the ancient land of Canaan. When his family was murdered he called upon his gods for power, which they granted. He became a god in his own right with the powers of Voldar, Lumiun, Arel, Ribalvei, Elbiam and Marzosh. One day he was tempted by a demon who bore him two children, Blaze and Satanus. The gods were so angered that they banished the children to the netherworld. Later, Shazam battled the Three Faces of Evil

and they were trapped inside the Rock of Eternity. The gods decreed that Shazam must watch over it for all time.

became a high priest to the pharaoh Ramses II of Egypt. As the wizard grew older, he sought a champion worthy to inherit his powers. The young prince Teth-Adam of Kahndaq

(Ramses' son) impressed the wizard with his fairness and decency. But before Shazam could bestow his powers, his daughter Blaze made a deal with the god Set. When Teth-Adam spoke the name "Shazam," instead of gaining the wizard's powers, he was blessed with the power of seven Egyptian gods: Shu, Heru, Amon, Zehuti, Aton and Mehen. Thus, though Adam spoke the name "Shazam," he did not draw power not fom the wizard.

Teth-Adam (translated "Mighty Adam") served Egypt for many years, but this duty drew him away from his wife and children (Shiruta, Gon and Hurut) in Kahndaq. While he was away, the mad priest, Ahk-ton, powered by the "Orb of Ra" ravaged Kahndaq and killed Adam's family. Adam could not apprehend Ahk-ton, so he entombed his family and returned to the court of Ramses. There he served as Egypt's champion alongside another great wizard, Nabu.

Thet-Adam finally found his revenge against Ahk-ton and his ally, Khafre. The two were defeated and Adam slew the priest. Teth-Adam continued to serve Egypt for hundreds of years, but ultimately the loss of his family drove him to extremes; he became overly protective of Kahndaq, which attracted the attention of Shazam. The wizard believed that Adam had been bewitched by Blaze and dubbed him Khem Adam ("Black Adam"). Shazam withdrew Adam's power into a scarab, and entombed them both for millennia.

Teth-Adam rested until his sarcophagus was disturbed by an expedition from the Sivana Foundation. There, Theo Adam betrayed and killed Marilyn and C.C. Batson over Teth-Adam's scarab. With the Scarab, Theo Adam awakened Thet-Adam's soul and accessed his ancient powers, becoming Black Adam. When Shazam and his new champion finally caught Theo, they took away his ability to speak and thus, his ability to access his powers. Adam was soon cured of this condition by Blaze. In addition, she coerced Theo into her service by holding the soul of his sister, Sarah Primm, hostage. When Blaze's brother, Lord Satanus set Primm's soul free, Adam did the right thing and fought Blaze.

He does not need to utter a magic phrase to summon the power. Originally, this was so, but he now draws his power directly from an ancient mystical scarab.

From the Egyptian gods

, Adam draws super-strength, invulnerability, flight and super-speed. Additionally, Adam's senses are acutely sharpened. Black Adam has repeatedly been described as a warrior who had proven himself to be highly skilled even before he was given the power of Shazam.

He is susceptible to the mental influence of his evil host, Theo Adam. Theo Adam is currently suppressed within Teht Adam's psyche.
at 01:04