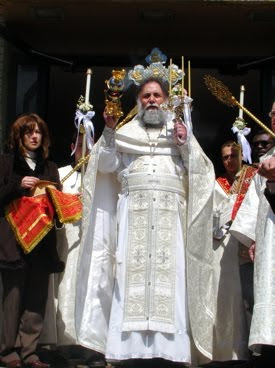 Easter Monday is the day after Easter Sunday and is celebrated as a holiday in some largely Christian cultures, especially Roman Catholic and Eastern Orthodox cultures. Easter Monday in the Roman Catholic liturgical calendar is the second day of the octave of Easter Week.

Formerly, the post-Easter festivities involved a week of secular celebration, but this was reduced to one day in the 19th century. Events include egg rolling competitions and, in predominantly Roman Catholic countries, dousing other people with water which traditionally had been blessed with holy water the day before at Easter Sunday Mass and carried home to bless the house and food. For Roman Catholics, Easter Monday is also a Holy Day of Obligation in Germany.

In the Eastern Orthodox Church and those Eastern Catholic Churches which follow the Byzantine Rite, Easter Monday is known as Bright Monday or Renewal Monday, and is the second day of Bright Week. The services are exactly the same as on Pascha (Easter Sunday), except that the hymns from the Octoechos are in Tone Two. It is customary to have a Crucession (procession headed by a cross) either after Paschal Matins or after the Paschal Divine Liturgy. It is customarily a day for visiting family and friends. Easter Monday is also the day when the feast day of St. George is celebrated, in years when St George's Day (April 23) falls during Holy Week or on Easter Sunday.