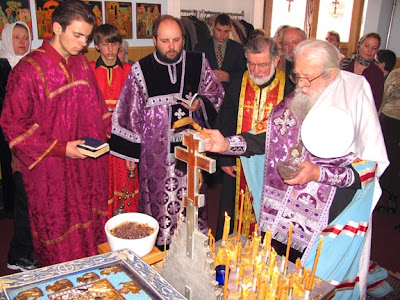 Radonitsa (Радоница, "Day of Rejoicing") is a holiday in the Eastern Orthodox Church which falls on the Monday or (more commonly) Tuesday of Saint Thomas Week—eight or nine days, respectively, after Easter (Paskha, Пасха). The day is a general memorial for the departed.

Because of the importance of the last few days of Holy Week, and because of the joy of the Resurrection, the Typikon (Ustav) forbids the celebration of the Panikhida (memorial service) from Great and Holy Thursday through Thomas Sunday (a period of eleven days). Therefore, the first opportunity after Pascha to remember the dead is on the second Monday of Pascha. However, because in Orthodox countries, a number of monasteries follow the custom of fasting on Mondays, the feast is often celebrated on Tuesday, so that all may partake of the paschal foods (which are intentionally non-fasting).

The practice of greeting the dead with the Resurrection is not merely a "baptism" of pagan practices, but has antecedents in the ancient Church. S. V. Bulgakov records the following:


The commemoration of the departed after Pascha was also done in extreme antiquity. St. Ambrose of Milan (340 – 397) says in one of his sermons: "It is truly meet and right, brethren, that after the celebration of Pascha, which we have celebrated, to share our joy with the holy martyrs and by them as participants in the suffering of the Lord, to announce the glory of the resurrection of the Lord". Although these words of St. Ambrose relate to martyrs, they may be an indication of our custom to commemorate the departed after Pascha on Monday or Tuesday of Thomas Week because the beginning of the solemn commemorations in the faith of those who died is established in the New Testament Church as a pious custom to the memory of the martyrs, [both] among the martyrs buried in antiquity and the others who have died.

St. John Chrysostom (349 - 407) also bears testimony that in his day they celebrated a joyful commemoration of the departed on Tuesday of Saint Thomas Week in his Homily on the Cemetery and the Cross.

Although the Typikon does not prescribe any special prayers for the departed on these days, the memorial is kept as a pious custom. Unlike the various Soul Saturdays throughout the year, there are no changes made to Vespers, Matins or the Divine Liturgy, to reflect this being a day of the dead.

On this day, after Divine Liturgy, the priest will celebrate a Panikhida in the church, after which he will bless the paschal foods that the faithful have brought with them. The clergy, with incense and candles, will then go in procession with the cross, followed by the faithful, to visit the graves of departed believers either in churchyards or in cemeteries. At the graves, paschal hymns are chanted together with the usual litanies for the departed, concluding with the moving "Memory Eternal" (Вѣчнаѧ памѧть,Viechnaia pamiat).

The paschal foods will then be consumed with joy by the friends and relatives of the deceased. It is common to place an Easter egg, a symbol of Christ's coming forth from the Tomb, on the graves of the departed, saluting them with the traditional paschal greeting: "Christ is Risen!" This practice is both to remind the faithful of the General Resurrection of the dead, and to "announce the Resurrection" of Christ to the departed.

Among the traditions that have grown up around Radonitsa, the following are noteworthy: