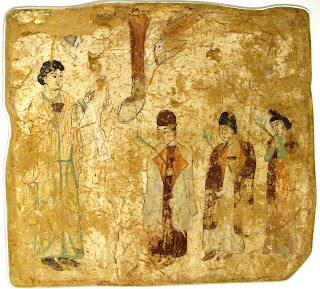 In the accounts of the four canonical Gospels, Jesus' Triumphal entry into Jerusalem takes place in the days before the last Last Supper, marking the beginning of his Passion.

According to the Gospels, before entering Jerusalem, Jesus was staying at Bethany and Bethphage, and John 12:1 states that he was in Bethany six days before passover. While there, Jesus sent two disciples to the village over against them, in order to retrieve a donkey that had been tied up but never been ridden, and to say, if questioned, that the donkey was needed by the Lord (or Master) but would be returned.

Jesus then rode the donkey into Jerusalem, with the three Synoptic gospels stating that the disciples had first put their cloaks on it, so as to make it more comfortable. In Mark and John the entry takes place on a Sunday.In Luke 19:41 as Jesus approaches Jerusalem, he looks at the city and weeps over it, foretelling the suffering that awaits the city.

The Gospels go on to recount how Jesus rode into Jerusalem, and how the people there lay down their cloaks in front of him, and also lay down small branches of trees. The people sang part of Psalms 118: 25-26 - ... Blessed is He who comes in the name of the Lord. We bless you from the house of the Lord ....
In the Synoptic Gospels, this episode is followed by the Cleansing of the Temple episode, and in all four Gospels Jesus performs various healings and teaches by way of parables while in Jerusalem, until the Last Supper.

Traditionally, entering the city on a donkey symbolizes arrival in peace, rather than as a war waging king arriving on a horse. Christians celebrate Jesus' entry into Jerusalem as Palm Sunday, a week before Easter Sunday.


"All this was done, that it might be fulfilled which was spoken by the prophet, saying,﻿ ﻿Tell ye the daughter of Sion, Behold, thy King cometh unto thee, meek, and sitting upon an ass, and a colt the foal of an ass.﻿"


Then shall the Lord go forth and fight against those nations, as when he fought in the day of battle. And his feet shall stand in that day upon the Mount of Olives, which is before Jerusalem on the east.

The triumphal entry and the palm branches, resemble the celebration of Jewish liberation in the 1 Maccabees (13:51) which states:


And entered into it ... with thanksgiving, and branches of palm trees, and with harps, and cymbals, and with viols, and hymns, and songs.

Jesus' entry on a donkey has a parallel in Zechariah 9:9 which states that:


thy king cometh unto thee; he is just, and having salvation; lowly, and riding upon an ass.

The symbolism of the donkey also refers to the Eastern tradition that it is an animal of peace, versus the horse, which is the animal of war. Therefore, a king came riding upon a horse when he was bent on war and rode upon a donkey when he wanted to point out that he was coming in peace. Therefore Jesus' entry to Jerusalem symbolized his entry as the Prince of Peace, not as a war waging king.