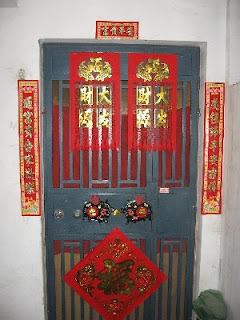 To “celebrate the New Year” is literally, “pass (the) year” (过年). You can greet people with “Pass the year good!” (过年好!). In more traditional areas people still literally congratulate one another for “passing the year,” or perhaps, for being passed by the ‘Year.’ The annoying traditional songs looped in supermarkets for the last week – the Chinese equivalent of cheesy Christmas music overdose – feature the greeting, “Congratulations!” (恭喜!). But why do people start congratulating one another after midnight? What has passed?

“Pass the ‘year’” is a pun or play on the idea that the monster, called ‘Year,’ who comes out at New Year’s to eat people, has “passed” over. It’s as if to say, “Congratulations! The monster has passed you by!” This monster hates the colour red, and people adorn their doors with it across the top and down both sides, similar to what the ancient Hebrews did with lamb’s blood before the Exodus, so that God would “pass over” their homes during the night when God came to kill the firstborn of Egypt. These red banner sets are standard CNY decorations; even our door has them.

I suspect most people merely see these phrases and decorations as traditions vaguely meant to bring good luck/fortune and ward off bad. I don’t know what percentage of the population is even aware of the more traditional meanings (especially in the cities), perhaps like many Westerners don’t know why we have Christmas trees, hang red stockings, or where Santa Claus came from (many New Year traditions are dying out). But the roots of these particular Chinese traditions apparently involve adorning the lintel and door posts in red so that a mystical being will literally “pass” over the family without killing anyone… curious. I wonder which tradition is older: the Hebrew Exodus or the Chinese year monster., nián shòu (年兽).

I found it thrilling that Chinese New Year and Passover shared a few things in common. They are both spring festivals, and both mark the beginning of the calendar year through lunar calculations. It is very important for the Chinese traditionally to clean our houses before New Year. It is called “Spring Cleaning.” New Year Day gives us the chance to start anew. Families bustle and clean and then no more cleaning is allowed on New Year’s Day. Is it something like the Jewish tradition of clearing the yeast out of the house?

Many Chinese families place red banners over the top and sides of their main door to "ward off evil spirits." In Taiwan, they like to decorate their doors with seven-character couplets, gold characters over red strips. Why seven, the biblically perfect number? For the Jewish Passover, the blood of a lamb was applied to the top and posts of the main door so that the Angel of Death would "pass over" and spare the life of the firstborn. Why is red such an auspicious color for the Chinese anyway? Could it be because it is the color of blood, of redemption?

Some Chinese anthropologists may well come up to me and give me some perfectly well researched reason for why these traditions are just so. But do you know what I think? I think, the Lord, being the Master Artist that He is, has left an indelible mark, His imprint, His signature, His legacy—call it what you like—in this culture, as He has probably done with many other cultures.

I believe this because I know my God to be all-powerful, all-knowing, the ruler of ALL nations, and THE Creator of everything that is. One day, when the trumpets sound, and we are all “out of here”, we will meet Him face to face and finally see Him in His true light. Then He will tell us why these traditions are celebrated just so.
at 00:23