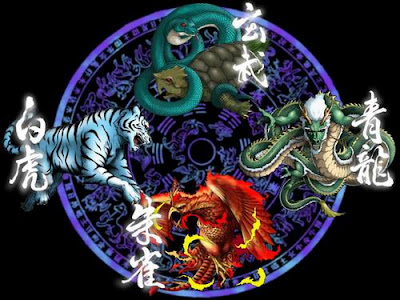 The Four Symbols (Chinese: 四象; pinyin: Sì Xiàng) are four mythological creatures in the Chinese constellations. They are:


Each one of them represents a direction and a season of the year, and each has its own individual characteristics and origins. They have been portrayed in many historical Chinese and Korean myths and fiction, and also appear in many modern Japanese comic books and animation.

A Han-dynasty pottery tile emblematically representing the 5 cardinal directions
Each of these mythological creatures has also been synthesized into the 5 element system:


The four legendary beasts (excluding Huáng-lóng; see above) represent a season each. The seasons they represent are as follows:


The Azure Dragon is one of the Four Symbols of the Chinese constellations. It is sometimes called the Azure Dragon of the East (simplified Chinese: 东方青龙; traditional Chinese: 東方青龍; pinyin: Dōng Fāng Qīng Lóng, or sometimes simplified Chinese: 东方苍龙; traditional Chinese: 東方蒼龍; pinyin: Dōng Fāng Cāng Lóng), and it is known as Seiryuu in Japan and Cheongryong in Korea. It represents the east and the spring season. It should not be confused with the mythological yellow dragon that is associated with the Emperor of China.

Like the other Four Symbols, the Azure Dragon corresponds to seven "mansions", or positions, of the moon.

The Vermilion bird is one of the Four Symbols of the Chinese constellations. According to Wu Xing, the Taoist five-elemental system, it represents the fire-element, the direction south, and the season summer correspondingly. Thus it is sometimes called the Vermilion bird of the South (南方朱雀, Nán Fāng Zhū Què) and it is also known as Suzaku in Japan and Jujak in Korea. It is often mistaken for the Fenghuang due to similarities in appearance, but the two are different creatures.[citation needed] The Fenghuang (Similar to the phoenix in western mythologies) are legendary ruler of birds associated with the Chinese Empress in the same way the dragon is associated with the Emperor, while the Vermilion Bird is a mythological spirit creature of the Chinese constellations.

Like the other Four Symbols, the Vermilion Bird corresponds to seven "mansions", or positions, of the moon.


The Vermilion bird is an elegant and noble bird in both appearance and behavior, it is very selective in what it eats and where it perches, with its feathers in many different hues of reddish orange. The Vermilion bird is often associated with the mythical Phoenix due to their associations with fire.

The White Tiger is one of the Four Symbols of the Chinese constellations. It is sometimes called the White Tiger of the West (西方白虎, Xī Fāng Bái Hǔ), and is known as Byakko in Japan and Baekho in Korea. It represents the west and the autumn season.

Like the other Four Symbols, the White Tiger corresponds to seven "mansions", or positions, of the moon.


During the Han Dynasty, people believed the tiger to be the king of all beasts. Legend had it that when a tiger reached 500 years old, its tail would turn white. In this way, the white tiger became a kind of mythological creature. It was said that the white tiger would only appear when the emperor ruled with absolute virtue, or if there was peace throughout the world. Because the color white of the Chinese five elements also represents the west, the white tiger thus became a mythological guardian of the west.

In the novel Shuo Tang Yanyi (Tales of Tang Dynasty), the reincarnation of White Tiger's Star is said to be Li Shimin's general Luo Cheng (羅 成) and the reincarnation of Azure Dragon's Star is said to be the rebellious general Dan Xiongxin (單 雄信). They two are sworn brothers of Qin Shubao (秦 叔寶), Cheng Zhijie (程 知節) and Yuchi Jingde (尉遲 敬德). Their souls after death are said to possess the body of the new heroes of Tang Dynasty and Liao Dynasty, Xue Rengui (薛 仁貴) and He Suwen (郃 苏文).

The Black Tortoise is one of the Four Symbols of the Chinese constellations. The word for "tortoise" was taboo; and the entire entity is not just the tortoise itself, but both the tortoise and the snake. It is sometimes called the Black Warrior of the North (北方玄武, Běi Fāng Xuán Wǔ), and is known as Genbu in Japan and Hyeonmu in Korea. It represents the north and the winter season. Although its name in Chinese, Xuánwǔ, is often translated as Black Tortoise in English, it is usually depicted as both a tortoise and a snake, specifically with the snake coiling around the tortoise.

Like the other Four Symbols, the Black Tortoise corresponds to seven "mansions", or positions, of the moon.


In ancient China, the tortoise and the snake were thought to be spiritual creatures symbolising longevity. During the Han Dynasty, people often wore jade pendants that were in the shape of tortoises. Because of ancient Chinese influence on Japan, honorific titles and badges in Japan often referred to the tortoise or images of tortoises.

In the classic novel, Journey to the West, Xuánwǔ was a king of the north who had two generals serving under him, a "Tortoise General" and a "Snake General." This king had a temple at Wudang Mountains in Hubei, thus there is a "Tortoise Mountain" and a "Snake Mountain" on the opposite sides of a river in Wuhan, the capital of Hubei.

In Taoist legend it was said that Xuánwǔ was the prince of a Chinese Emperor. However, he was not interested in taking the throne, but decided to study in Tao's way. At age 16, he left his parents to search for enlightenment in Tao's way. It was said that he eventually achieved god status and was worshipped as a god of northern sky.

A Xuanwu sculpture from the Yongle Emperor era, from the collection of the Hubei Provincial Museum
Other Chinese legends also speak of how the "Tortoise General" and a "Snake General" came to be. During Xuánwǔ's study to achieve enlightenment and god status he was told that in order to fully achieve god status, he must purge all humanly flesh from his body. Since he was born he had been eating the food of the world, humanly food, therefore his stomach and intestines were still human. Legend told of an event that a god came and changed out his human stomach and intestines for a godly body so he could fully achieve god status. (It was also said that the stomach and intestines that were tossed out became the "Tortoise Mountain" and "Snake Mountain".) The stomach and intestines taken out by the god who did the surgery on Xuánwǔ were said to have taken on the shape of a tortoise (stomach) and a snake (intestines). As many Chinese legends speak of certain animals becoming demons over time as they gain knowledge, that's what the tortoise and snake became, and terrorized people. As Xuánwǔ, now in his god status, heard of this, he came and slayed the demons from his past. However, he did not kill them, as the snake and tortoise demons showed remorse. He let them train under him and atone for their wrong doings, and they became the "Tortoise General" and "Snake General", and they assisted Xuánwǔ with his quests.

According to another source, once Xuánwǔ's had begun study of the way, he discovered that he must purge himself of all his past sins to become a god. He learned to achieve this by washing his stomach and bowels (intestines) in the river. In the washing of his internal organs, his sins melted from them and into the river in a dark, black form. These then formed into a black tortoise and snake who terrorized the people. Once Xuánwǔ learned of this, he returned to conquer the forms of this past sins and subdue them under himself and they became his servants.

Huang Long (黃龍，黄龙 or 黄竜, Yellow Dragon, Mandarin: huang2 long2, Cantonese: wong4 lung4, Japanese: Kōryū or Ōryū, Korean: Hwang-Ryong, Vietnamese: Hoàng Long) is a hornless dragon who once emerged from the River Luo and presented the legendary Emperor Fu Xi with the elements of writing. According to legend, when it appeared before Fu Xi, it filled a hole in the sky made by the monster Gong Gong. Its waking, sleeping and breathing determined day and night, season and weather.

In East Asian culture, there is sometimes a fifth Guardian Beast of the Si Ling. This deity is the guardian of the center and it represents the element earth, the Chinese quintessence, as well as the changing of the seasons.

Huang Long does not appear in Japanese mythology: the fifth element in the Japanese elemental system is Void, so there cannot be an animal representing it. Because of this, Huang Long is often forgotten. However, some consider the Ouryu (Ōryū, yellow dragon) as the Japanese counterpart of Huang Long since they share some similarities.

At the end of his reign, the first legendary Emperor Huang Di was said to have been immortalized into a dragon that resembled his emblem, and ascended to Heaven. Since the Chinese consider Huang Di as their ancestor, they sometimes refer to themselves as "the descendants of the dragon". This legend also contributed towards the use of the Chinese dragon as a symbol of imperial power.
at 02:10

Very intersting and i lkie it very much,,,
Nice page.