Dualism of Faith, the Soul, Life, and Philosophy 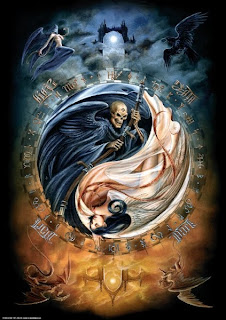 Dualism denotes a state of two parts. The word's origin is the Latin duo, "two" . The term 'dualism' was originally coined to denote co-eternal binary opposition, a meaning that is preserved in metaphysical and philosophical duality discourse but has been diluted in general or common usages.

For example, Mazdaism (Mazdaen Zoroastrianism) is both dualistic and monotheistic (but not monist) since in that philosophy God—the Creator—is purely good, and the antithesis—which is also uncreated—is an absolute one. Zurvanism (Zurvanite Zoroastrianism), Manichaeism and Mandaeism, are representative of dualistic and monist philosophies since each has a supreme and transcendental First Principle from which the two equal-but-opposite entities then emanate. This is also true for the lesser-known Christian gnostic religions, such as Bogomils, Catharism, etc. More complex forms of monist dualism also exist, for instance in Hermeticism, where Nous "thought" - that is described to have created man - brings forth both good and evil, depending on whether it receives prompting from God or from the demons.

Both 'bitheism' and 'ditheism' imply a belief in two equally powerful gods with complementary or antonymous properties. However, while bitheism implies harmony, ditheism implies rivalry and opposition, such as between Good and Evil. For example, a ditheistic system would be one in which one god is creative, the other is destructive (cf. theodicy). In a bitheistic system, one god could be male and the other female (cf. duotheism). However, bitheistic and ditheistic principles are not always so easily contrastable, for instance in a system where one god is the representative of summer and drought and the other of winter and rain/fertility (cf. the mythology of Persephone). Marcionism, an early Christian sect, held that the Old and New Testaments were the work of two opposing gods: both were First Principles, but of different religions.

Alternatively, dualism can mean the tendency of humans to perceive and understand the world as being divided into two overarching categories. However that definition is considered a tad controversial. In this sense, it is dualistic when one perceives a tree as a thing separate from everything surrounding it, or when one perceives a "self" that is distinct from the rest of the world. In traditions such as classical Hinduism, Zen Buddhism or Islamic Sufism, a key to enlightenment is "transcending" this sort of dualistic thinking, without merely substituting dualism with monism or pluralism.

The opposition and combination of the universe's two basic principles of yin and yang is a large part of Taoist religion. Some of the common associations with yang and yin, respectively, are: male and female, light and dark, active and passive, motion and stillness. The Tai-Chi in actuality has very little to do with Western dualism; instead it represents the philosophy of balance, where two opposites co-exist in harmony and are able to transmute into each other. The Taoist religion with its dualistic concept of yin and yang is related to the religions that are both dualistic and monotheistic such as Mazdaism in the sense that the underlying force of nature, the Way, or Tao, is the First Principle which manifests itself through the dual properties of the yin and yang. In the yin-yang symbol there is a dot of yin in yang and a dot of yang in yin. This symbolizes the inter-connectedness of the opposite forces as different aspects of Tao, the First Principle. Contrast is needed to create a distinguishable reality, without which we would experience nothingness. Therefore, the independent principles of yin and yang are actually dependent on one another for each other's distinguishable existence. The complementary dualistic concept in Taoism represents the reciprocal interaction throughout nature, related to a feedback loop, where opposing forces do not exchange in opposition but instead exchange reciprocally to promote stabilization similar to homeostasis. An underlying principle in Taoism states that within every independent entity lies a part of its opposite. Within sickness lies health and vice versa. This is because all opposites are manifestations of the single Tao, and are therefore not independent from one another, but rather a variation of the same unifying force throughout all of nature.

The complementary aspects of masculinity and femininity are revered by certain Neo-pagan religions as well.

During the classical era of Buddhist philosophy in India, philosophers such as Dharmakirti argue for a dualism between states of consciousness and Buddhist atoms (the basic building blocks that make up reality), according to "the standard interpretation" of Dharmakirti's Buddhist metaphysics. Typically in Western philosophy, dualism is considered to be a dualism between mind (nonphysical) and brain (physical), which ultimately involves mind interacting with the physical brain, and therefore also interacting with the micro-particles (basic building blocks) that make up the brain tissue. Buddhist dualism, in Dharmakirti’s sense, is different in that it is not a dualism between the mind and brain, but rather between states of consciousness (nonphysical) and basic building blocks (according to the Buddhist atomism of Dharmakirti, Buddhist atoms are also nonphysical: they are unstructured points of energy). Like so many Buddhists from 600-1000 CE, Dharmakirti’s philosophy involved mereological nihilism, meaning that other than states of consciousness, the only things that exist are momentary quantum particles, much like the particles of quantum physics (quarks, electrons, etc.).

In some cultures, people (or also other beings) are believed to have two (or more) kinds of soul. In several cases, one of these souls is associated with body functions (and is sometimes thought to disappear after death), and the other one is able to leave the body (e.g. a shaman's free-soul may be held to be able to undertake a spirit journey). The plethora of soul types may be even more complex.

Correctly distinguishing between Self (Spirit/Consciousness Purusha) and Matter/Nature (Prakrti) is of central importance to Samkhya Philosophy. Samkhya Philosophy elaborates that although Prakriti originates from Purusha, there is a fundamental dualism between spirit and phenomena that is presented to such Selves by Matter/Nature. Such phenomena of Matter/Nature includes reflections of the intellect, the faculty that makes things personal (the I-Maker/Ahamkara), the instinctual mind (manas), the capacities to perceive sense data, the capacities to act, the principles of the elements of sense perception, and the gross elements. These arise when Prakriti is in the presence of a Purusha, and they become enmeshed and entangled when there is mis-identification between Prakriti and Purusha. False confusion between the Self and what is not the Self is considered the fundamental ignorance that perpetuates bondage in this world. Liberation is sought by becoming aware of such distinctions on a very deep level of personal knowledge, so that one may eventually use the great faculty of the mind—intellectual reflection (Buddhi/Mahat) -- without mistakenly identifying it with the Purusha, and then the effects of such entanglement will unravel and one will no longer be bound by incarnations or confused by Prakriti.

The Vedanta philosophy is divided into Dvaita (dualistic) and Advaita (non-dualistic) monism. Neither propose dualism in consciousness and matter. While Dvaita philosophy recognizes the differences between Jiva and Ishvara, Advaita philosophy looks at everything as Brahman which has three fundamental attributes sat-cit-ānanda (Truth-Consciousness-Bliss). Advaita vedanta insists that the experiential personal realization of unity of everything must be achieved. Until a person achieves such realization, Advaita Vedanta uses the Samkhya dualism of consciousness and matter for describing the world. Dvaita, on the other hand, rejects the notion of equating Atman with Paramatman as they are different entities. Dvaita holds that upon Mukti, one enjoys the same quantity of bliss as sat-cit-ānanda but one can never be equal to Brahman.

We are too accustomed to the duality. So we tend to discriminate between things, ideas, morals and
so on. We don’t see the human being, the life like a whole, an unity. So we discriminate, between
good and evil, science and religion, faith and reason and so on.
All my life I have been searching for trying to understand the difference between good and evil. Many times I have been asking myself: did Mother Teresa of Calcutta, who sacrificed her life in the service of the poor, the sick and the outcast, do so of her free choice or because she had a character that, even without willing it, drove her to act in that way? Moreover, I have been asking myself: is sacrificing oneself for the benefit of others truly according to God’s will? I have been asking myself whether the behaviors and the actions of human beings were not caused by unconscious drives; whether it was a mere illusion to consider ‘free will’ and ‘free judgement’ really possible. I think that nobody who can freely choose between good and evil consciously opts for the latter. Everyone looks for good, at least if it is related to his own person. Now, why is it that someone seems a saint and some other seems a demon? What is the difference really between the two? Maybe neither good nor evil, neither angels nor demons, neither saints nor sinners exist. Is it the unconscious drive, the experience or the different way of reacting to them that causes the so-called ‘good’ or ‘bad’ behavior. It is not the fruit of free or conscious acts of will.
The book I have recently written deepens many religious issues, and I want to draw it to your attention. The title is “Travels of the Mind”. It is available at http://www.strategicpublishinggroup.com/title/TravelsOfTheMind.html
If you have any questions, I am most willing to offer my views on this topic.
Ettore Grillo