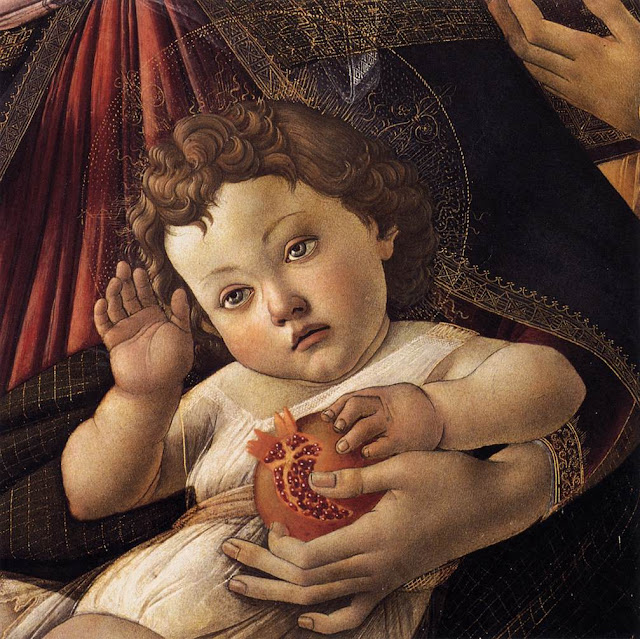 Judaism
Exodus 28:33–34 directed that images of pomegranates be woven onto the hem of the me'il ("robe of the ephod"), a robe worn by the Hebrew High Priest. 1 Kings 7:13–22 describes pomegranates depicted on the capitals of the two pillars (Jachin and Boaz) which stood in front of the temple King Solomon built in Jerusalem. It is said that Solomon designed his coronet based on the pomegranate's "crown" (calyx). Jewish tradition teaches that the pomegranate is a symbol for righteousness, because it is said to have 613 seeds which corresponds with the 613 mitzvot or commandments of the Torah. For this reason and others, many Jews eat pomegranates on Rosh Hashanah.

It is also a symbol of fruitfulness. The pomegranate is one of the few images which appear on ancient coins of Judea as a holy symbol, and today many Torah scrolls are stored while not in use with a pair of decorative hollow silver "pomegranates" (rimmonim) placed over the two upper scroll handles. Some Jewish scholars believe that it was the pomegranate that was the forbidden fruit of the Garden of Eden. Pomegranate is one of the Seven Species (Hebrew: שבעת המינים, Shiv'at Ha-Minim), the types of fruits and grains enumerated in the Hebrew Bible (Deuteronomy 8:8) as being special products of the Land of Israel.

The pomegranate has a calyx shaped like a crown. In Jewish tradition it has been seen as the original "design" for the proper crown.

Ancient Greece
The wild pomegranate did not occur in the Aegean area in Neolithic times. It originated in eastern Iran and came to the Aegean world along the same cultural pathways that brought the goddess whom the Anatolians worshipped as Cybele and the Mesopotamians as Ishtar.

The myth of Persephone, the chthonic goddess of the Underworld, also prominently features the pomegranate. In one version of Greek mythology, Persephone was kidnapped by Hades and taken off to live in the underworld as his wife. Her mother, Demeter (goddess of the Harvest), went into mourning for her lost daughter and thus all green things ceased to grow. Zeus, the highest ranking of the Greek gods, could not leave the Earth to die, so he commanded Hades to return Persephone. It was the rule of the Fates that anyone who consumed food or drink in the Underworld was doomed to spend eternity there. Persephone had no food, but Hades tricked her into eating six pomegranate seeds while she was still his prisoner and so, because of this, she was condemned to spend six months in the Underworld every year. During these six months, when Persephone is sitting on the throne of the Underworld next to her husband Hades, her mother Demeter mourns and no longer gives fertility to the earth. This became an ancient Greek explanation for the seasons. Dante Gabriel Rossetti's painting Persephona depicts Persephone holding the fatal fruit. It should be noted that the number of seeds that Persephone ate varies, depending on which version of the story is told. The number of seeds she is said to have eaten ranges from three to seven, which accounts for just one barren season if it is just three or four seeds, or two barren seasons (half the year) if she ate six or seven seeds.

The pomegranate also evoked the presence of the Aegean Triple Goddess who evolved into the Olympian Hera, who is sometimes represented offering the pomegranate, as in the Polykleitos' cult image of the Argive Heraion. According to Carl A. P. Ruck and Danny Staples, the chambered pomegranate is also a surrogate for the poppy's narcotic capsule, with its comparable shape and chambered interior. On a Mycenaean seal illustrated in Joseph Campbell's Occidental Mythology 1964, figure 19, the seated Goddess of the double-headed axe (the labrys) offers three poppy pods in her right hand and supports her breast with her left. She embodies both aspects of the dual goddess, life-giving and death-dealing at once. The Titan Orion was represented as "marrying" Side, a name that in Boeotia means "pomegranate", thus consecrating the primal hunter to the Goddess. Other Greek dialects call the pomegranate rhoa; its possible connection with the name of the earth goddess Rhea, inexplicable in Greek, proved suggestive for the mythographer Karl Kerenyi, who suggested that the consonance might ultimately derive from a deeper, pre-Indo-European language layer.

In the 6th century BC, Polykleitos took ivory and gold to sculpt the seated Argive Hera in her temple. She held a scepter in one hand and offered a pomegranate, like a 'royal orb', in the other. "About the pomegranate I must say nothing," whispered the traveller Pausanias in the 2nd century, "for its story is something of a mystery." Indeed, in the Orion story we hear that Hera cast pomegranate-Side (an ancient city in Antalya) into dim Erebus — "for daring to rival Hera's beauty", which forms the probable point of connection with the older Osiris/Isis story. Since the ancient Egyptians identified the Orion constellation in the sky as Sah the "soul of Osiris", the identification of this section of the myth seems relatively complete. Hera wears, not a wreath nor a tiara nor a diadem, but clearly the calyx of the pomegranate that has become her serrated crown.

Christianity
In some artistic depictions, the pomegranate is found in the hand of Mary, mother of Jesus. Within the sanctuary of Hera at Foce del Sele, Magna Graecia, is a chapel devoted to the Madonna del Granato, "Our Lady of the Pomegranate", "who by virtue of her epithet and the attribute of a pomegranate must be the Christian successor of the ancient Greek goddess Hera", observes the excavator of the Heraion of Samos, Helmut Kyrieleis.

In modern times the pomegranate still holds strong symbolic meanings for the Greeks. On important days in the Greek Orthodox calendar, such as the Presentation of the Virgin Mary and on Christmas Day, it is traditional to have at the dinner table "polysporia", also known by their ancient name "panspermia," in some regions of Greece. Supposedly, in ancient times they were offered to Demeter and to the other gods for fertile land, for the spirits of the dead and in honor of compassionate Dionysus. When one buys a new home, it is conventional for a house guest to bring as a first gift a pomegranate, which is placed under/near the ikonostasi (home altar) of the house, as a symbol of abundance, fertility and good luck. Pomegranates are also prominent at Greek weddings and funerals. When Greeks commemorate their dead, they make kollyva as offerings, which consist of boiled wheat, mixed with sugar and decorated with pomegranate. It is also traditional in Greece to break a pomegranate on the ground at weddings and on New Years. Pomegranate decorations for the home are very common in Greece and sold in most homegoods stores.

Pomegranates are a motif often found in Christian religious decoration. They are often woven into the fabric of vestments and liturgical hangings or wrought in metalwork. Pomegranates figure in many religious paintings by the likes of Sandro Botticelli and Leonardo da Vinci, often in the hands of the Virgin Mary or the infant Jesus. The fruit, broken or bursting open, is a symbol of the fullness of Jesus' suffering and resurrection. In the Eastern Orthodox Church, pomegranate seeds may be used in kolyva, a dish prepared for memorial services, as a symbol of the sweetness of the heavenly kingdom.

Islam
According to the Qur'an, pomegranates grow in the gardens of paradise (55:068). The Qur'an also mentions (6:99, 6:141) pomegranates twice as examples of good things God creates.

Hinduism
The pomegranate (Sanskrit: Beejpur, literally: replete with seeds) symbolizes prosperity and fertility, and is associated with both Bhoomidevi (the earth goddess) and Lord Ganesha (who is also called Bijapuraphalasakta, or the one fond of the many-seeded fruit). In Hindi, the pomegranate is called by its Persian name of "anaar". 'Bhagwa' is a variety of pomegranate that is widely available in India. Every part of the plant [root, bark, flowers, fruit, leaves] is used for medicinal purposes in Ayurveda.
at 02:01

Very interesting and beautiful iconography. You might be interested in "Pomegranate Roads: A Soviet Botanist's Exile from Eden" by Dr. Gregory Levin. There is so much lore as well as botanical revelations about the pomegranate in this book published by Floreant Press.