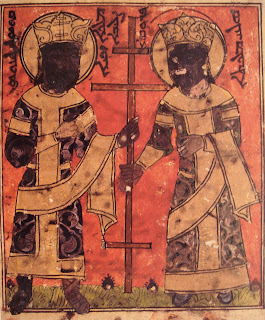 Though in modern times the Mongols are primarily Buddhist, during the time of the Mongol Empire (13th–14th centuries), they had a substantial number of Christians, many of whom were in positions of considerable power. Overall, Mongols were highly tolerant of most religions, and typically sponsored several at the same time. Many Mongols had been proselytized by Christian Nestorians since about the 7th century.

The Mongols had been proselytised by Christian Nestorians from the Assyrian Church of the East since about the 7th century. Many Mongol tribes, such as the Kerait, the Naiman, the Merkit, the Öngüd, and to a large extent the Kara Khitan (who practiced it side-by-side with Buddhism), were Nestorian Christian.

Genghis Khan himself was a Shamanist, but was tolerant of other faiths. When, as the young Temüjin, he swore allegiance with his men at the Baljuna Covenant around 1200 AD, there were representatives of nine tribes among the 20 men, including "several Christians, three Muslims, and several Buddhists." His sons were married to Christian princesses of the Kerait clan who held considerable influence at his court. Under the Great Khan Mongke, Genghis's grandson, the main religious influence was that of the Nestorians.

As the Mongols had a primarily nomadic culture, their practice of Christianity was different from what might have been recognized by most Western Christians. The Mongols had no churches or monasteries, but claimed a set of beliefs that descended from the Apostle Thomas, which relied on wandering monks. Further, their style was based more on practice than belief. The primary interest in Christianity for many, was the story that Jesus had healed the sick and survived death, so the practice of Christianity became interwoven with the care of the sick. Jesus was considered to be a powerful shaman, and another attraction was that the name Jesus, sounded like Yesu, the Mongol number "9". It was a sacred number to the Mongols, and was also the name of Genghis Khan's father, Yesugei.

The Mongols also adapted the Christian cross to their own belief system, making it sacred because it pointed to the four directions of the world. They had varied readings of the Scriptures, especially feeling an affinity to the wandering Hebrew tribes. Christianity also allowed the eating of meat (different from the vegetarianism of the Buddhists). And of particular interest to the hard-drinking Mongols, they enjoyed that the consuming of alcohol was a required part of church services.

The Kerait clan of the Mongols were converted to Nestorianism early in the 11th century. Other tribes evangelized entirely or to a great extent during the 10th and 11th centuries were the Naiman and the Merkit. The Kara-Khitan Khanate also had a large proportion of Nestorian Christians, mingled with Muslims.

An account of the conversion of the Kerait is given by the 13th century Jacobite historian, Gregory Bar Hebraeus, who documented a 1009 letter by bishop Abdisho of Merv to the catholicos John VI which announced the conversion of the Keraits to Christianity. According to Hebraeus, in early 11th century, a Kerait king lost his way while hunting in the high mountains. When he had abandoned all hope, a saint appeared in a vision and said, "If you will believe in Christ, I will lead you lest you perish." The king returned home safely, and when he later met Christian merchants, he remembered the vision and asked them about their faith. At their suggestion, he sent a message to the Metropolitan of Merv for priests and deacons to baptize him and his tribe. As a result of the mission that followed, the king and 20000 of his people were baptized.

As early as 1223, Franciscan missionaries had been traveling eastward to visit the prince of Damascus and the Caliph of Baghdad. In 1240, nine Dominicans led by Guichard of Cremone are known to have arrived in Tiflis, the capital of Christian Georgia, by the orders of Pope Gregory IX. Georgia submitted to the Mongols in 1243, so as the missionaries lived for five years in the Georgian realm, much of it was in contact or in close proximity with the Mongols.In 1245, Pope Innocent IV sent a series of four missions to the Mongols. The first was led by the Dominican André de Longjumeau, who had already been sent to Constantinople once by Saint Louis to acquire the Crown of thorns from Baldwin II. His travels are known by the reports of Mathew Paris. Three other missions were sent between March and April 1245, led respectively by the Dominican Ascelin of Cremone (accompanied by Simon de Saint-Quentin, who later wrote the account of the mission in Historia Tartarorum),[30] the Franciscan Lawrence of Portugal, and another Franciscan, John of Plano Carpini.

In 1271, the Marco Polo brothers brought an invitation from Kublai Khan to the pope imploring him that a hundred teachers of science and religion be sent to reinforce the Nestorian Christianity already present in his vast empire. The great Mongol leader concluded:

This came to nought due to the hostility of influential Nestorians within the largely Mongol court. When in 1253 the Franciscan William of Rubruck arrived at Karakorum, the western Mongol capital, and sought permission to serve its people in the name of Christ, he was forbidden to engage in missionary work or remain in the country, and he had to return home.

The Eastern Court under the more immediate rule of Kublai Khan was eager to secure Western assistance in its rule over the Chinese. In 1289, Pope Nicholas IV sent the Franciscan John of Monte Corvino to China by way of India, thereby passing Karakorum. Although the great khan had already died by the time John arrived (1294), the court at Khanbaliq received him graciously and encouraged him to settle there. John was China’s first Roman Catholic missionary, and he was significantly successful. He laboured largely in the Mongol tongue, translated the New testament and Psalms, built a central church, and within a few years (by 1305) could report six thousand baptized converts. He also established a lay training school of 150 students. But the work was not easy. Although often opposed by the Nestorians who had over the years increasingly filtered back into China’s cities, the Franciscan mission continued to grow. Other priests joined him and centers were established in the coastal provinces of Kiangsu (Yangchow), Chekiang (Hangchow) and Fukien (Zaitun).

One of John’s most vigorous younger missionaries was Odorico da Pordenone (1265-1331), who arrived in Khanbaliq by way of India in 1326 and whose subsequent sixteen years of unremitting journeys throughout China, preaching the gospel in the vernacular, resulted in over twenty thousand converts. (Some scholars reported that by 1381 the total number of communicants exceeded a hundred thousand).

Following the death of Monte Corvino, an embassy to the French Pope Benedict XII in Avignon was sent by Toghun Temür, the last Mongol emperor in China (Yuan dynasty), in 1336. The embassy was led by a Genoese in the service of the Mongol emperor, Andrea di Nascio, and accompanied by another Genoese, Andalò di Savignone. These letters from the Mongol ruler represented that they had been eight years (since Monte Corvino's death) without a spiritual guide, and earnestly desired one. The pope replied to the letters, and appointed four ecclesiastics as his legates to the khan's court. In 1338, a total of 50 ecclesiastics were sent by the Pope to Peking, among them John of Marignolli. In 1353 John returned to Avignon, and delivered a letter from the great khan to Pope Innocent VI.

In the mid-14th century, the Chinese rose up and drove out the Mongols from China however, thereby launching the Ming Dynasty (1368). By 1369 all Christians, whether Roman Catholic or Syro-Oriental, were expelled by the Ming Dynasty. With the end of Mongol rule in the 14th century, Christianity almost disappeared in mainland Asia.

Some military collaboration with Western Christian powers took place in 1259-1260 when the ruler of Antioch Bohemond VI and his father-in-law Hetoum I of Cilician Armenia: allied with the Mongols under Hulagu. Hulagu was generally favourable to Christianity: his mother was Christian, his principal wife Doquz Khatun was a prominent Christian leader in the Ilkhanate, and at least one of his key generals, Kitbuqa, was also Christian.

There were numerous Dominican missionaries to the Ilkhanate, such as Ricoldo of Montecroce and Barthelemy of Bologna, who later became the bishop in the Ilkhanate capital of Maragha. By the year 1300, there were numerous Dominican and Franciscan convents in the empire of the Il-Khan. About ten cities had such institutions, including Maragha, Tabriz, Sultaniye, Tifflis, and Erzurum. To help with coordination, the Pope established an archbishop in the new capital of Sultaniye in 1318 in the person of Francon de Pérouse, who was assisted by six bishops. His successor in 1330 was Jean de Cor.

The Nestorian monk Rabban bar Sauma was sent by the Ilkhan to Western courts to offer an alliance between the Mongols and the Europeans, and while there, Bar Sauma explained the situation of the Nestorian faith to the European monarchs. In 1302, the Nestorian Catholicos Mar Yaballaha III, who as a young man had accompanied the older Rabban Bar Sauma from Khanbaliq (Beijing), sent a profession of faith to the Pope. He thereby formalized his conversion to Roman Catholicism, though 304 letter to the pope that his move had been strongly opposed by the local Nestorian clergy.

In his letters to the Mongol ruler in 1321 and 1322, the Pope still expressed his hope that the Mongol ruler would convert to Christianity. Between 500 to 1000 converts in each city were numbered by Jean of Sultaniye.

Mongol-European contacts diminished as Mongol power waned in Persia, and the remaining Mongols progressively adopted Islam. In 1295, Ghazan (great-grandson of Hulagu) formally adopted Islam when he took the throne in 1295. By the 14th century, the Mongols had effectively disappeared as a political power.
at 00:17