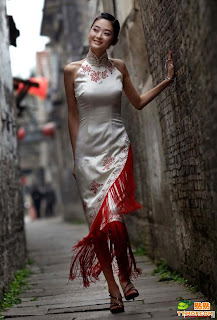 From among a world of colors, red stands out the most. The color red is fresh and pure, and in China we call it China Red. Chinese people are fascinated by the color red not only because of its intoxicating vibrancy, but also because of its rich meaning in Chinese culture and history.

It is believed that no country in the world has ever adopted a color in such a thoroughgoing way as China, where red is a symbol that gives color to the soul of the nation. In the past, red stood for dignity and mystery. Even now, we adore the color much more than we love it. It is can be said that 'China Red' is an eternal theme for China, and an essential color for the Chinese people. "China Red" has become a quite popular word, attracting the world's attention.

Shooting red-colored things in China is an easy task, as its powerful presence can be found every-where. All traditional red things have been playing special roles in China: the walls of ancient palaces, the national flag, Chinese knot, lantern, couplet, clothes, traditional paper-cuts for window decorations, and even red tanghulu (sugar-coated haws on a stick). Red is the color of the auspicious, signifying reunion, health, happiness, harmony, peace and prosperity. Only real things and events can fully display and explain its beauty. Only in its relation with people can the color be alive and meaningful. Here we will reveal the cultural significance of China red.

Chinese knot is actually an ancient art of weaving and Chinese people have used knots as decorations since the Han Dynasty. Now people in China are still intrigued by the secrets and complicated beauty of traditional red knots. "Knot" In Chinese has the meanings of reunion, friendliness, warm, marriage etc, so the red Chinese knot has come to be the symbol of reunion, luck, harmony, and love.

Traditionally, a Chinese knot must be bent, tied and crafted from a single red rope, to express the endless circle of happy life. That is the most important characteristic of Chinese Knot. By combining different knots or other auspicious adornments skillfully, a unique auspicious ornament, especially the red-colored which represents beauty, happiness and wishes, is formed.

Today, Chinese knot has become an important element of international fashion. To fit with the needs of modern life, Chinese Knot has various products, most of which are used as auspicious hanging and knitting clothing adornment.

Combining China red, form and complexity in a very traditional type of harmony, the square-shaped “True Love Knot” (tongxinjie-see the image on the left) is the most famous type of Chinese knot. Instead of the traditional way to pop the question "will you marry me", you can choose a light-hearted and humorous way to suggest marriage by giving your sweetheart the True Love Knot, indicating "Let's tie the knot".

The Red Lantern is closely linked with the lives of Chinese people, as you can find it everywhere, especially during festivals and holidays. Hanging on the front gate of houses and stores, red lanterns decorate the street in a unique way.

Lanterns in China are more than lighting devices and red lanterns are regarded as a basic symbol of the Chinese culture, a symbol of brightness, happiness and reunion. Both the gigantic lanterns at the Tiananmen Gate and the small lanterns of a peasant's hut express the same warm, happy and joyous atmosphere. You see a red lantern and your mind thinks of China.

Supposed to warn away evil sprits while brightening the mood with the red glow of good luck, red lanterns are considered a necessity of traditional Chinese festivals. In Lantern Festival(the fifteenth day of the first Chinese lunar month), the preferred warm red of traditional lanterns creates a convivial atmosphere at the family reunion as well as lights up the hope for the New Year. Lanterns, especially the red-colored, deserve adoration for the magical element they add to the atmosphere.

The cheongsam or qipao is a high-necked dress with distinctive Chinese features. The dress is buttoned on the right side, with a loose chest, a fitting waist, and slits up from the sides, all of which combine to enhance the beauty of the female shape. Easy to slip on and comfortable to wear, the cheongsam perfectly fits the beautiful figure of Asian females.

The Cheongsam, especially the red-colored, is one of the most typical, traditional costumes of Chinese women. Even though Cheongsam is not often appearing in daily life, it is worth collecting, for it reflects the Chinese culture and arts with its national characteristics and strong happy colors and fashion designs. That's why brides in China choose red cheongsam as their most preferred dress, to perform the traditional Chinese wedding ceremony and create a happy environment.

The cheongsam enjoys a long history and is now enjoying resurgence in popularity in the world of international fashion. After evolvement and development, Cheongsam has become an inspiration for fashion designers. Regarded as a symbol of the Chinese nation, Cheongsam is often seen worn by women on formal or semi-formal occasions. In either case, it creates an impression of simple and quiet charm, elegance and neatness. No wonder cheongsam is so much liked by women not only of China but of foreign countries as well.

Pasting red spring couplet has been an important part of the Chinese New Year's celebration since ancient times. On lunar New Year's Eve, families in both urban and rural areas make it a point to decorate their gates or apartment doorframes with the customary couplets.

The couplet, written on two strips of red paper, is composed of two poetic sentences which match and rhyme with each other to express hopes for the coming year. The red couplets, along with the New Year paintings on the door, serve as beautiful decorations as well as protective talismans.

Paper-cut art is another traditional handcraft created by Chinese people. People cut papers into animals, flowers or people in various patterns. Pasted on the window, door lintel or desks for the festival atmosphere, paper cuttings are mainly used for decoration during the Spring Festival to welcome the Chinese New Year.

It can be very interesting to learn paper-cut, which is all made by hand. You need only a knife and paper. But, no mistake can be made during the process, otherwise the work would be a fail.

Daofu is one of the most popular forms of paper-cutting. The word "fu",which means good luck and happiness, is written on a square red paper and often displayed upside down (dao) on doors and elsewhere. The act of turning the word “fortune” upside down is called daofu, which literally means "Good luck is coming!" It is not only a play on words, but a play with words.

In China, to celebrate happy events, firecrackers are set off not only for the color, but for the 'Noise' too. People in China believes that red firecrackers can not only make noises and bring good luck, but scare off evil spirits and ghosts with the loud pop as well. The floor is covered by a layer of red color pieces.

It is a tradition in Chinese families for the youngsters to give their elders the following greeting during the 15-day Spring Festival: "Gong xi fa cai, hong bao na lai!" which means: "Wish you a prosperous new year. Give me a red envelope!" The older members of the family will then give the youngsters a red (for luck) envelope with a gift of money. The elderly may also place the red envelopes under their pillows on the Chinese New Year's Eve to give them surprises. The money is wrapped in red envelops called hongbao in Chinese. The custom in China is much like the one in western countries that Father Christmas (Santa Claus) comes down the chimney and places gifts in children's stockings when they are sleeping on Christmas.

As in China color red is connected with good luck, the red envelopes are supposed to protect children from evil spirits. The custom is extremely popular with children. But what they really care about is the lucky money inside the red envelopes, which they can use to buy the things they like. It is no wonder Chinese kids love red so much!

Should you wish to bring good fortune upon yourself then I am sure that you will be absolutely delighted to give your red envelopes to your lovely kids!

The best way to feel China Red is to stay in China during the Spring Festival or attend a Chinese wedding. To celebrate the Spring Festival – the most important festival in China, people will set off red firecrackers, paste red couplets on doorframes and red paper-cuts on windows, hang and light red lanterns at night, and give out red envelopes to kids.

In contrast to the use of white, especially with wedding dresses, popular in many western countries, a Chinese wedding features the use of red, which is supposed to ensure a happy future for the couple. In a traditional Chinese wedding, you will find red everywhere. Red candles create a cozy and warm environment, and red Double Happiness characters are pasted on doors and walls. Red invitation cards are sent and guests present red envelopes. The new bed is covered with red bed sheets and red quilts. The couple walks down a red carpet, strewn with red flowers. Even at modern weddings, where the bride wears the western white wedding gown for the ceremony, it is customary for her to change into something red for the reception.

In China, red is more than just a color. It carries the ancient history and culture of the Chinese nation. China Red is filled with mysterious charm beyond description and it is right here in China waiting for you to feel, to discover!
at 02:11

The color red is fresh and pure,it is suitable for all materials.
Domain registration India