Are Jesus and Buddha Brothers? 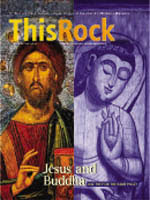 "When you are a truly happy Christian, you are also a Buddhist. And vice versa." So concludes best-selling author and Buddhist monk Thich Hhat Hanh near the end of his popular book Living Buddha, Living Christ.

Some Catholics agree. For example, Jesuit Father Robert E. Kennedy, a Roshi (Zen master), holds Zen retreats at Morning Star Zendo in Jersey City. He states on his web site: "I ask students to trust themselves and to develop their own self-reliance through the practice of Zen." The St. Francis Chapel at Santa Clara University hosts the weekly practice of "mindfulness and Zen meditation." Indeed, the number of Buddhist retreats and workshops being held at Catholic monasteries and parishes is growing.

Similarly, controversial New Testament scholar Marcus J. Borg writes in Jesus and Buddha: The Parallel Sayings, "Jesus and the Buddha were teachers of wisdom," contending that "wisdom is not just about moral behavior, but about the ‘center,’ the place from which moral perception and moral behavior flow." Jesus and Buddha proclaimed a "world-subverting wisdom," Borg writes, "that undermined and challenged conventional ways of seeing and being in their time and in every time." He notes that both men spoke about "the way" and concludes, "Thus both were teachers of the way less traveled. ‘Way’ or ‘path’ imagery is central to both bodies of teaching."

But are these two "ways" really as compatible as Hanh, Kennedy, Borg, and others believe? What similarities and differences are there between the historical persons and teachings of Jesus and Buddha? Can we agree with Hanh that people should be able to have "both the Buddha and Jesus within their life"?

Buddhism is the fourth largest religion in the world, with about 370 million adherents. Although less than 1 percent of Americans identify themselves as Buddhist, interest in this ancient belief system is growing. There are more Buddhist texts in major bookstores than works dedicated to Islam or Hinduism, and there has been a steady stream of articles and books by and about the Dalai Lama in recent years.

Since the 1960s, the influence of Buddhist thought in some Catholic circles has become increasingly evident. After the Second Vatican Council’s call for respectful interreligious dialogue, many Catholics—including some priests and religious—fully embraced the study of Buddhism. Much was made of the "common characteristics" of Catholicism and Buddhism, particularly in the realm of ethics. External similarities (including monks, meditation, and prayer beads) seemed to indicate newly discovered commonalties between the followers of Christ and Buddha. While some edifying dialogue took place, some Catholics mistakenly concluded that Buddhism was just as true as Christianity and that any criticism of Buddhism was merely "triumphalistic."

Today it is not uncommon for Catholic retreat centers to offer classes and lectures on Zen Buddhism, Christ and Buddha, and even "Zen Catholicism." Their bookstores feature titles such as Zen Spirit, Christian Spirit: The Place of Zen in Christian Life; Jesus and Buddha: The Parallel Sayings; and Going Home: Jesus and Buddha As Brothers, wherein comparisons are made between Christian and Buddhist mysticism, at times suggesting that the two are essentially identical in character and intent.

Malcomson is just one of a growing number of Christians drawn to Buddhism. In Crossing the Threshold of Hope, John Paul II notes, "Today we are seeing a certain diffusion of Buddhism in the West." What makes this diffusion possible, and why is Buddhism attractive to so many?

Buddhism offers spiritual vitality in the midst of the emptiness of secular life, gives the promise of inner peace, and meets the desire for an explicit moral code. In his classic study Buddhism: Its Essence and Development, Edward Conze writes, "To a person who is thoroughly disillusioned with the contemporary world, and with himself, Buddhism may offer many points of attraction, in the transcending sublimity of the fairy land of its subtle thoughts, in the splendor of its works of art, in the magnificence of its hold over vast populations, and in the determined heroism and quiet refinement of those who are steeped in it."

Another appeal is the non-dogmatic and ostensibly open-minded character of Buddhism. For those who reject the dogmatic, objective claims of Christianity or hold that Christianity should avoid an "exclusive" approach to truth, Buddhism offers an easier alternative. Buddhists teach that they do not practice a religion, a philosophy, or a type of science but rather a way of life that cannot be explained by or contained within any categories used in traditional Western thought. What makes Buddhism so "open-minded," though, is that its teachings are deliberately ambiguous.

Put another way, Buddhism transcends notions of "religion" or "belief" and so can appear compatible with Christianity. In an interview with Beliefnet.com, the Dalai Lama stated, "According to different religious traditions, there are different methods. . . . For example, a Christian practitioner may meditate on God’s grace, God’s infinite love. This is a very powerful concept in order to achieve peace of mind. A Buddhist practitioner may be thinking about relative nature and also Buddha-nature. This is also very useful."