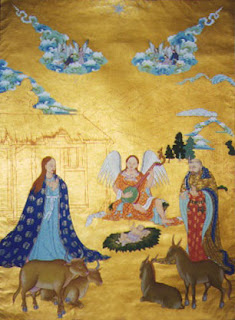 Monasticism (from Greek: monachos — a solitary person) is the religious practice in which one renounces worldly pursuits in order to fully devote one's life to spiritual work.

Many religions have monastic elements, including Buddhism, Christianity, Hinduism, Islam, and Jainism, though the expressions differ considerably. Those pursuing a monastic life are usually called monks or brothers (male), and nuns or sisters (female). Both monks and nuns may also be called monastics.

Buddhist Monasticism
The order of Buddhist monks and original nuns was founded by Gautama Buddha during his lifetime over 2500 years ago. The Buddhist monastic lifestyle grew out of the lifestyle of earlier sects of wandering ascetics, some of whom the Buddha had studied under, and was initially fairly eremetic in nature. Monks and nuns were expected to live with a minimum of possessions, which were to be voluntarily provided by the lay community. Lay followers also provided the daily food that monks required, and provided shelter for monks when they were needed.

After the death of the Buddha, the Buddhist monastic order developed into a primarily cenobitic movement. The practice of living communally during the rainy vassa season, prescribed by the Buddha, gradually grew to encompass a settled monastic life centered on life in a community of practitioners. Most of the modern disciplinary rules followed by monks and nuns – the Patimokkha – relate to such an existence, prescribing in great detail proper methods for living and relating in a community of monks or nuns. The number of rules observed varies with the order; Theravada monks follow around 227 rules. There are a larger number of rules specified for bhikkhunis (nuns).

Buddhist monasticism with its tradition of councils, missions, and being a source of knowledge and literacy spread from India to the Middle East and eventually west, with Christian monasticism following in its footsteps in the areas where Emperor Ashoka sent missions.

Christian Monasticism
Monasticism in Christianity is a family of similar traditions that began to develop early in the history of the Christian Church, modeled upon Scriptural examples and ideals, but not mandated as an institution by the Scriptures.

The focus of Christian monasticism is on an ideal called the religious life, also called the counsels of perfection. The words of Jesus which are the cornerstone for this ideal are "be ye holy like your heavenly Father is holy."

Christian cenobitic monasticism as it is mainly known in the West started in Egypt, which had warm temperatures ideal for living away from society. Originally, all Christian monks were hermits; and especially in the Middle East this continued to be very common until the decline of Syrian Christianity in the late Middle Ages. Saint Anthony the Great is cited by Athanasius as one of these early 'eremitic monks.'

But not everybody is fit for solitary life, and numerous cases of hermits becoming mentally unstable are reported. The need for some form of organized spiritual guidance was obvious; and around 318 Saint Pachomius started to organize his many followers in what was to become the first Christian monastery. Soon, similar institutions were establish throughout the Egyptian desert as well as the rest of the eastern half of the Roman Empire.
at 09:52