Christianity is to Judaism is as Buddhism is to Hinduism 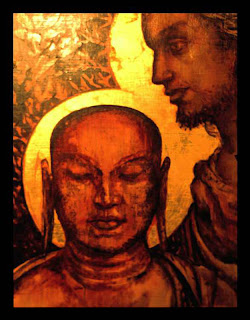 The way of Jesus was the way of the Gospel, and the Gospel was and is entirely different from the law. The way of Jesus invariably led to the Cross because without the Cross, Christianity would have been Judaism. It was the callousness which was the difference between them. Callousness was what separated those who believed in the unification by the Cross and those who was not able to believe.

Buddhism and Christianity, on the other hand, are non-ethnic religions. As such, both are missionary religions. Both Buddha and Christ gave a missionary command. It was said from the lips of Buddha:

This missionary command is a true gem as it holds the essential part of Buddhism: the teaching and the compassion – to be shared with the many.

This was the way in which the Awakened had to speak for Him to awaken all the sleeping people who were exposed to the sufferings of life's nightmare.

The missionary command of the Resurrected has a different wording; it has, however, much in common with that of the Awakened. It is written in Matthew 28:18-20:

"Then Jesus came to them and said, "All authority in heaven and on earth has been given to me. Therefore go and make disciples of all nations, baptising them in the name of the Father and of the Son and of the Holy Spirit, and teaching them to obey everything I have commanded you. And surely I am with you always, to the very end of the age."

Again, the attention is brought to the teaching, but the teaching is given in another context. Here it is not the king's son who became a revivalist preacher, rather it is the revivalist preacher who became the king's son, the successor of full authority in heaven and on earth. And yet, in both situations the message is given for the many—all the nations. The whole thing is about a universal, even cosmic message.
at 04:27

Hello Blogmaster;
I would like to use your illustration for my poem:

Deep within the Pure Land that many know as Heaven
Christ Buddha sat in animated conversation:

“Yes”, he said, “Right from the first, in fact, before,
there were much too many misunderstandings.”

“As with me,” the other said.
“My biggest peeve is how they turn to hate
what I have taught of love.”

I understand”, he said, “It can be wearying
to find such things in those we knew as friends.
But harder yet is what they ask of me, so constantly,
avoiding all responsibility.”

“So we agree. And yet I see myself in them,
and find them lovely.”

I would give credit. May I? dennis@hisland.co.uk