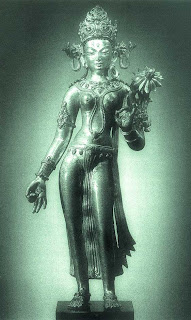 Tārā has many stories told which explain her origin as a bodhisattva. One in particular has a lot of resonance for women interested in Buddhism and quite likely for those delving into early 21st century feminism.

In this tale there is a young princess who lives in a different world system, millions of years in the past. Her name is Yeshe Dawa, which means "Moon of Primordial Awareness". For quite a number of aeons she makes offerings to the Buddha of that world system "Tonyo Drupa". She receives special instruction from him concerning bodhicitta — the heart-mind of a bodhisattva. After doing this, some monks approach her and suggest that because of her level of attainment she should next pray to be reborn as a male to progress further. At this point she lets the monks know in no uncertain terms that from the point of view of Enlightenment it is only "weak minded worldlings" who see gender as a barrier to attaining enlightenment. She sadly notes there have been few who wish to work for the welfare of beings in a female form though. Therefore she resolves to always be reborn as a female bodhisattva, until samsara is no more. She then stays in a palace in a state of meditation for some ten million years, and the power of this practice releases tens of millions of beings from suffering. As a result of this Tonyo Drupa tells her she will henceforth manifest supreme bodhi as the Goddess Tārā in many world systems to come.

With this story in mind it is interesting to juxtapose this with a quotation from H.H the Dalai Lama about Tārā, spoken at a conference on Compassionate Action in Newport Beach, CA in 1989:

"There is a true feminist movement in Buddhism that relates to the goddess Tārā. Following her cultivation of bodhicitta, the bodhisattva's motivation, she looked upon the situation of those striving towards full awakening and she felt that there were too few people who attained Buddhahood as women. So she vowed, "I have developed bodhicitta as a women. For all my lifetimes along the path I vow to be born as a woman, and in my final lifetime when I attain Buddhahood, then, too, I will be a woman."

Tārā then, embodies certain ideals which make her attractive to women practitioners, and her emergence as a Bodhisattva can be seen as a part of Mahayana Buddhism's reaching out to women, and becoming more inclusive even in 6th century C.E. India.