Is the Reverend Father Robert Kennedy a Jesuit Priest or Zen Master? Both! 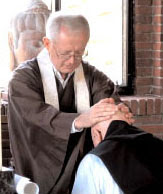 The Reverend Father Robert Kennedy, S.J., Roshi, is a Jesuit priest and Zen teacher in the White Plum lineage. He studied with Yamada Roshi in Kamakura, Japan, with Maezumi Roshi in Los Angeles, and with Glassman Roshi in New York. Glassman Roshi installed Kennedy as sensei in 1991 and conferred Inka (his final seal of approval) in 1997, making him a roshi (master).

Kennedy Roshi is the author of Zen Gifts to Christians and Zen Spirit, Christian Spirit.

The attraction to Zen

In Zen Gifts to Christians, Kennedy Roshi suggests that people, leaning toward a deeper form of prayer, are often attracted to studying Zen. It is not [necessarily] because they wish to become Buddhists but because they seek a more contemplative prayer life. He writes:

What is the practice of Zen meditation?

Zazen is the practice of stilling the mind through wholehearted attentiveness to the breath. This steady attentiveness, coupled with the stillness of the body, frees the mind from its ordinary activities of thinking, daydreaming, or speculating on the nature of life. Zen demands discipline and effort. The support of group sitting is a strong encouragement to practice.

What are the benefits of practicing Zen?

When practiced attentively, Zen offers an ever-deepening insight into the oneness of life. This insight reveals to us our own human potential and calls us to use this potential in the service of others brings us to the present moment, clarifying and supporting our readiness to meet the ever-changing circumstances of daily life.

Kennedy's vision is for the Morning Star Zendo to foster continuously an environment for interfaith dialogue—to be a place where people of all religious varieties meet and respect one another's traditions and points of view.

The spirit at the zendo reflects and builds upon Kennedy's deep respect for and knowledge of Buddhism. It carries out the principles laid out in the Jesuit statement on mission and interreligious dialogue, which demands that Jesuits be not only familiar with the thought of men and women of other religious traditions, but be immersed with them in theological exchange and in a dialogue of life, action, and religious experience.

For the occasion of Fr. Hunt's installation, the Superior General of the Society of Jesus, Peter-Hans Kolvenbach, S.J., wrote:

"Because of the long preparation and training required to become a master of the demanding Zen training, Fr. Hunt's achievement is one that we can all celebrate in thanksgiving to God ... Jesuits and other Christians have found Zen to be a valuable instrument for progressing in the spiritual life. ... By coming to focus on the present moment through the practice of the techniques of Zen meditation, the Christian can become aware of God's immediate loving presence."

James Fredericks best captures Kennedy's vision of Zen Buddhism for Christians and non-Christians in Horizons, the journal of the College Theology Society. He wrote: "Kennedy's approach is theologically sophisticated and deceptively simple. [His is the] work of a Christian who is spiritually mature, and [of] a Zen practitioner of advanced training."

Robert F. Drinan, S.J., professor of law at Georgetown University, evaluated a Zen sesshin he attended with Kennedy Roshi. He wrote: "After the retreat ... I experienced Asian wisdom combined with Christian illumination. I found God in a new way. I became a new man with deeper insights, and more importantly, a better Christian."