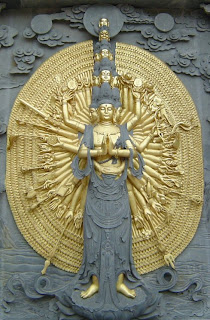 As Mahayana Buddhism developed, a range of Bodhisattvas were identified, each with their own special qualities. What follows is a description of the main ones:

The literal meaning of Avalokitesvara is 'the Lord who looks down', the implication being that he looks down with compassion (karuna). He is often depicted with eleven heads and with many arms. These depict his ability to see the suffering of all beings and his readiness to help all those who invoke him. In the Tibetan tradition he is known as Chenrezi. In China he takes a female form and is known as Kuan Yin.

Ksitigarbha has a number of roles. Primarily, he is the bodhisattva who vowed to postpone nibbana until all those beings trapped in hell-worlds are free. By invoking him, the fate of hell-beings is said to be shortened and their suffering alleviated. He is also said to offer protection to travelers and children. Traditionally he is depicted as wandering monk with robe and staff.

Maitreya is the future Buddha who presently resides in the Tusita heaven where - traditionally - Buddhas reside before their final rebirth. He was the earliest Bodhisattva to gain devotees who aimed to be reborn in the Tusita heaven alongside him. 'Maitreya' means 'the loving one'. He is associated with good luck, friendliness and prosperity. The so-called 'Laughing Buddha' is a Chinese representation of Maitreya

Manjusri means 'gentle glory' and this bodhisattva is associated with wisdom and courage. He is often portrayed wielding, in his right hand, a five-pointed sword which cuts through the bonds of ignorance. In his left hand, he holds a book symbolizing the Prajnaparamita or 'wisdom literature' of Mahayana Buddhism.

'Samantabhadra' means 'universal virtue'. This bodhisattva is renowned for his ten vows which include the respecting of all Buddhas and to transfer merit to all beings. He is often shown riding a six-tusked elephant, the six tusks representing the six perfections or paramitas: giving, patience, morality, vigor, meditation and wisdom.

Tara is a female Bodhisattva who is said to have been formed from tears shed by Avalokitesvara. These stemmed from his realization of how many suffering beings there were dependent on his deliverance. Like Avalokitesvara, it is Tara's compassionate nature that she is noted for. There are twenty-one forms of Tara but it is Green Tara and White Tara that are the most popular. White Tara is portrayed as having seven eyes, one on each hand and foot and three in her face.

Vajrapani, meaning 'holder of the vajra', signifies the power of all the Buddhas. The vajra, is a five pronged scepter which represents the combination of wisdom and compassion. In Buddhist art, Vajrapani is depicted as a blue wrathful deity, with either two arms or four arms and a tiger skin about his waist.
at 08:43