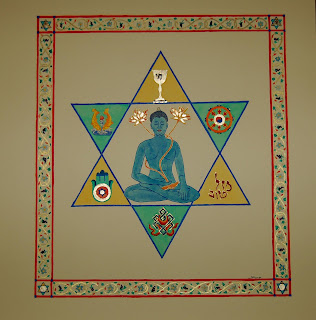 Buddhism is one of the largest world philosophies that exist today. It is entrenched in almost all the cultures of the Far East, from Mongolia in the north to Vietnam in the south, Japan in the east and Central Asia in the west and is making head way in the US and Europe. In the age of Internet connections and Globalization one would best understand the culture and society of one of the world's biggest philosophies. This is wholesome for a bilaterally influenced world society.

The Far East has an enchanting pull on young Israelis. They go traveling for long periods of time to India, China and other South East Asian countries where they see a very different world outlook. The Israel Center for the Study of Buddhism will give them that outlook closer to home.

The Israel Center for the Study of Buddhism will strive to instill awareness, understanding and appreciation of the arts and culture of Israel and the Far East through artistic collaboration and intellectual exchange.

The Israel Center for the Study of Buddhism main goal is to bring an understanding of the fundamentals and the history of Buddhism as a whole from the earliest times up to the present so that Israeli society can better understand the Far East and it's impact on globalization.

By elevating Israeli academic scholarship onto the forefront of Buddhist research internationally to better understand the social, political and economic dynamics of the region and by advancing the notions of inter-faith Tolerance and Non-violence, the Israel Center endeavors to bring the Far East to the Middle East.

Our primary objective will be to develop and maintain a research library unique to the Middle East. This will comprise the primary sources of Buddhist, Far Eastern and Jewish cultural and literary activity over the ages. In addition to the foundation of the library, the Israel Center will also have access to computer databases, internet, audio-visual facilities and other general educational materials to develop well rounded research inquiries.

Understanding the traditional cultures of the Far East requires a comparative standard which in our case is Israeli society and Judaism. Each culture will be studied individually to comprehend its specific ethnic characteristics, such as Confucianism and Taoism in China, Hinduism in India, shamanistic Bön and King Gesar legends of Tibet, Shintoism in Japan and Judaism in Israel.

The translation of the Chinese, Tibetan and Pali Tipitakas into Hebrew will be the cornerstone of our activities. Other translations of traditional and modern works of Israeli and Far Eastern literatures will also be undertaken.

Specific interest will be placed on the dispersion of Buddhism from India to other parts of Asia and how Buddhism influenced and was influenced by the indigenous religions and philosophies in those countries, especially in Gandhara and in Dunhuang.

Comparative studies will center on the art, history, languages, literatures, philosophies and other cultural aspects of Buddhism, especially with Judaism, in the Diaspora and in Israel and the impact they have on Globalization.

Lectures and seminars will be held on general and academic subjects and issues. University scholars and religious sages will meet to exchange modern and traditional perspectives surrounding common topics. Researchers will be able to share their work with others informally or with colleagues from various institutions in annual forums organized by the Israel Center.

The teaching of the Pali, Sanskrit, Chinese, and Tibetan languages (and the translating from one to the other) will center on techniques and styles the Buddhist sage-translators used in order to help us better translate the Tipitaka into Hebrew. It will also invite interest with the Israeli general public to better understand our global neighbors. Other relevant languages would also be taught upon member request.

Publication of the lectures, conferences and translations will be distributed for further investigation and inquiry through various mediums such as anthologies, monographs, the Center's web site and academic journal in Hebrew, English and French.

With the world becoming a much smaller place, the Israel Center for the Study of Buddhism was created to give Israeli society the opportunity to better understand our Asian neighbors, then and now.

Through independent research and extensive translations, the Israel Center endeavors to open the doors of the Far East much wider. Once opened, the cultural, economic and global interaction between the Israeli and the Far Eastern societies will mutually flourish in all areas.

In order to promote the objective cultural understanding between Judaism and Buddhism in their respective societies and their place in a global environment, the Israel Center for the Study of Buddhism requires financial support. This can be done by becoming an associate of the Israel Center. By donating, you will receive the Center’s newsletter with updates on lectures and progress reports on our translation works.

For further information on ways to support us, please contact the director Shmuel Ben Or at:

The preliminary goals in need of support are the following: