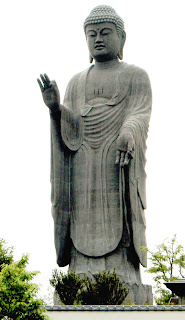 In addition to the historical Buddha, Siddhattha Gotama (or Gautama), Buddhism has a mythological dimension that incorporates a range of other Buddhas with their own specific qualities. Here are some of the more prominent:

Aksobhya (Akshobhya)
'Aksobhya' - which means 'immovable' or 'imperturbable' - is the name given to a Buddha who is said to reside in the eastern paradise of Abhirati. According to one legend, when he was a Bodhisattva he vowed never to give in to anger. In painting, however, he is portrayed, somewhat paradoxically, as a wrathful form with blue complexion, a vajra or diamond in one hand and touching the earth with his other. Often he is depicted riding on a blue elephant.

Amitabha is 'the Buddha of Unlimited Light' who is said to preside over the Western paradise known as Sukhavati. The story has that in a previous birth, as a monk called Dharmakara, he vowed that he would in the future create a land which was conducive to winning enlightenment. Sukhavati or the Pure Land is the fulfillment of this vow. Those born in the Pure Land cannot be reborn as a hell-being, animal or ghost and would only have one further rebirth before attaining enlightenment. To be born in the Pure Land the believer must have a sincere wish to be reborn there and must call upon the name of Amitabha ten times. Amitabha has especial significance for Pure Land Buddhism.

This is 'the Healing Buddha' or 'Medicine Buddha' and is deemed to have a number of powers beneficial to those who call upon him. These include healing, long life, wealth, and protection of the state. In Buddhist art his skin is either gold or blue and in one hand he holds a medicine bowl symbolic of his role.

This is the name given to the historical Buddha and means 'Sage of the Sakyas', Sakya being the clan that the Buddha was born into. In the Lotus Sutra, however, Sakyamuni is portrayed more as a supernatural figure who proclaimed that he achieved enlightenment many eons ago. The historical Buddha is viewed as one of a number of projections of Sakyamuni that have appeared in the world to lead beings to enlightenment.

Vairocana
'Vairocana' means the 'Resplendent One' or 'Shining Out' and represents the dharma or transcendent truth of the Buddhist message. In the three-body doctrine of Mahayana Buddhism, he represents the dharma-body and is also associated with the Adi Buddha who embodies the essence of the teaching and the final goal.
at 09:37