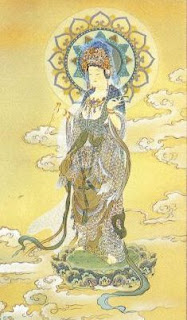 A second Interfaith Retreat/Conference for Zen practitioners across religious traditions was held at the Wainwright House, a newly renovated conference center in Rye, New York. This was led by Ruben Habito, resident Zen teacher of the Maria Kannon Zen Center in Dallas and The Rev. Susan Ji-on Postal, Zen teacher of the Meeting House Zen Group in Rye, New York. About 30 participants from various religious backgrounds participated in this 3-day retreat/conference.

The highlight of the event was a "dharma duet" in which both teachers gave a joint talk based on the text, "This is my body!" This particular text was chosen primarily because of its resonance in the experience of Christians with the Eucharist and Buddhists with Hakuin's Song of Zazen, in which it is repeatedly chanted, "this very body..the body of awakening." In Habito's words, "from a 3-dimensional perspective, to come to one focus and not as two parallel things, we offer one text, 'This is my body!'" Postal opened her talk by citing lines from Hakuin's Song of Zazen. "Sentient beings are primarily all Buddhas. It is like ice and water; apart from water, no ice can exist. Outside sentient beings, where do we find the buddhas? How boundless the cleared sky of samadhi; how transparent the perfect moonlight of wisdom. At this moment, what more need we seek as the truth eternally reveals itself, this very place is the land of purity. This very body, the body of the Buddha." She emphasized not only the importance of experiencing awakening but the embodiment of that as the "essential matter." Having also studied under Abbot Tetsugen Glassman, she recalled two kinds of eye-openings from a talk of his. "The first one being the wisdom eye where one sees the non-separation of all things and seeing clearly one's at one with all things." The second eye-opening she called the "dharma eye" which involved understanding uniqueness, or difference. In that kind of realization, one sees their own life as "all I have." Having been afflicted with systemic lupus, she described her earlier life as going up and down like an "inconsistent roller coaster." In the 1980s, as a single mother with two children, she struggled with her own anxieties, as well as with her physical condition, afflicted with an incurable illness (lupus). In this situation, attacked by fear, she said she was able to experience two gifts. The first, she said, was through a dream in which she saw a large Buddha, a beneficent Buddha who was touching and healing her. Suddenly she woke up from the dream and said, "Those are my hands." This was her first direct experience that it was her hands that were giving healing to her. The second experience came while she was meditating one night and she was filled with sorrow. She longed for her mother. Usually when we are sick, she said, our first impulse is to look for our mother. She went back to sit and kept meditating on that wish for her mother. She described a sudden "shower of unconditional love" that washed over her yet it was much stronger than what her mother could have given her. She felt totally healed, she said, and supported and cared for. She felt as though the whole universe was filled with love and energy. These were her two ways, she said, one may experience, "This is is my body." Habito offered three events in his life that brought the text home in a special way. After having been ordained as a Jesuit priest in Japan, he returned home to Manila to celebrate mass with his family and friends in his hometown in Cabuyao. The center of the celebration was "this is my body, given for you." He offered communion to each of the parishioners at the mass. After the mass, as he met his guests at the reception line, his parents introduced him to some people who were responsible for his parents' meeting one another, and to persons who held Habito in their arms when he was a baby, but whom he had never met since. "I realized in a very vivid way how each person celebrating the mass together at that time was part and parcel of who 'I am,' and re-cognizing those persons unleashed a sense of gratitude. There came the realization that I am all that I am, precisely because each and everyone of these persons were there in my life as they are. So...this is my body."

The second event he related occurred in Kamakura, Japan, while he was attending a sesshin with his Zen teacher Yamada Koun. Normally, there would be 50-60 participants and of those, 15-20 were Christians. The Christians were allowed to celebrate the Eucharist in the morning while the Buddhists chanted sutras. The Eucharistic celebration centered on the words of consecration, "this is my body given for you." While these words were being proclaimed, the Heart Sutra was being chanted, and it served as a steady pulsating background for the eucharistic celebration. There was an interior symphony resounding while the Catholics were receiving communion and sutras were being chanted. It was only during that particular part of the day, said Habito, that the Christians were there in that room and the rest of the Sangha chanted the sutras. The rest of the day, both Christians and Buddhists were doing the same things, waking up in the morning, dozing off, experiencing leg and back pains, falling in line for dokusan. Habito said it all became for him "a manifestation of one body...that sangha was one body. The resonance of those words in the Eucharist saw itself being realized in what was happening during that sesshin, 'This is my body'." The third event occurred at a worship service in the chapel of the Perkins School of Theology when some visitors from Central America spoke of how many of their friends were under oppressive conditions, wherein they became victims of military brutality, leading to death or "disappearance." The service was done in the context of the Eucharist, and there was a strong sense of solidarity with the Central American brothers and sisters in struggle that was heightened during the service. As each person went to receive the Eucharist, each was given a cross made of two sticks and a small slip of paper with the name of a person who had disappeared. Back in their pews, each recipient was asked to stand up one by one and read the name on their paper, saying "Presente!" while raising the cross with the other hand. As the names were called, Habito related, those persons became present in their midst: "This is my body."

This article originally appeared in Buddhist Christian Studies, Vol. 16
at 11:17