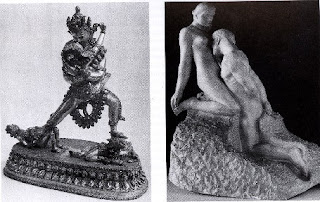 Soulmate (or soul mate) is a term sometimes used to designate someone with whom one has a feeling of deep and natural affinity, friendship, love, intimacy, sexuality, and/or compatibility.

Classical – Greek mythology – Originally humans were combined of four arms, four legs, and a single head made of two faces, but Zeus feared their power and split them all in half, condemning them to spending their lives searching for the other half to complete them. This theory was presented as a half-serious story by Aristophanes in Plato's Symposium, after all the participants at the Symposium ("drinking party") were charged to philosophize on the topic of love.

Spiritual and religious – Concepts of reincarnation and karma. Soulmates have spent many previous lifetimes together.

Companion soulmate – People with whom one has made a connection

Twin soulmates – Very close friends with whom one has strong bonds.

Twin flame soulmate – A popular romantic belief that there is only one true soulmate.

Scientific soulmate – (If) a relationship can be quantified, and scored according to an internal happiness scale. A scientific soulmate is the person with whom you are the absolute happiest. You would therefore be less happy with any other person in existence.

Balance partners and messengers – The people you meet along the way who help you create balance in your life.

Divine complement – A new colloquialism for a 'match made in heaven', a twin soul, who holds inborn potentials that match and complement one's own and who is linked eternally through a signature in the heart at the dimension of the spirit.

Plato wrote in his Symposium that humans have been looking for their soul mate ever since Zeus cut them in half. In his mythic story, Plato describes a world where there were men, women and people who were both men and women. Apparently, humans began discussing how they could climb up to heaven and replace the gods. The gods were upset by this and discussed what should be done. The simplest solution would be to destroy mankind, but Zeus came up with a better idea. He suggested cutting all human beings in half. This would serve two purposes. First, it would immediately double the number of people making offerings to the gods. Second, it would weaken the humans, so they would not be able to carry out their plan. Zeus' idea was accepted, and the humans were all divided into two. Naturally, the humans were upset at this, and Zeus decided to enable each half to have intercourse with their opposite, symbolically creating a whole. Consequently, the males sought their female half, and the females sought their male half, allowing them to reproduce.

Some followers of the New Age religion believe that souls are literally made and/or fated to be the mates of each other, or to play certain other important roles in each other's lives. Following this concept, one can have many soulmates. For example: One could see another person they have never met in this lifetime and instantly hate or love them because of previous interaction(s) with the other in one or more previous lifetimes. The most popular use of this concept is the idea that devoted lovers may reincarnate together.

Also, being conscious of the "soul mate connection" is not necessary, according to this idea.

According to theories popularized by Theosophy and in a modified form by Edgar Cayce, God created androgynous souls, equally male and female. The souls split into separate genders later, perhaps because they incurred karma while playing around on the earth, or "separation from God". Over countless reincarnations, each half seeks the other. When all karmic debt is purged, the two will fuse back together and return to the ultimate.

If you are seeking your soul mate, maybe you can find him or her at the Buddhist Matrimonial Network.
at 00:01