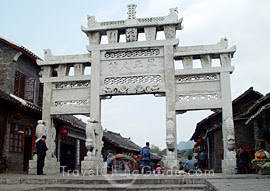 Qingyan Ancient Town, one of the most famous historical and cultural towns in Guizhou Province, lies in the southern suburb of Guiyang. As an ancient town, covering an area of 741 acres, Qingyan Town was originally built in 1378. Nowadays, because of its long history and strong cultural atmosphere, Qingyan Ancient Town has become an attractive destination for numerous domestic and foreign tourists.

Dating back to the beginning of the Ming Dynasty (1368--1644), Qingyan town was built for military reasons. Because of its geographical location, Zhu Yuanzhang, the first emperor of Ming Dynasty established it as a station for transferring military messages and to house a standing army. Through years of modification and repeated restoration, Qingyan Ancient Town has gradually become a distinctive ancient town with cultural features of Ming and Qing Dynasties (1644 - 1911).

Although small in size, Qingyan Ancient Town has a well-planned architectural style, hundreds of sites of relics, and an influential local culture.

Due to the local geology, Qingyan Ancient Town was built completely of stone. Visitors can see spectacular city walls built right on the cliffs with vast rocks, which divided Qingyan into inner and outer towns. There are four gates in the wall facing north, south, east and west. Outside the four gates, there were originally eight stone tablets, which were considered the symbols of Qingyan Ancient Town. Of the eight, three remain with delicate sculptures on each surface. The most famous one is called Zhao Lunli Baisui (longevity) Fang.

Walking inside the inner town, visitors will surely marvel at the ancient architecture here. There are over 30 types including monasteries, temples, cabinets, caves, courtyards and palaces. All of them were delicately designed by the skillful architects of the Ming and Qing Dynasties. A number of exquisite articles, such as the stone sculptures of Ciyun Temple and wooden sculptures of Shoufo Temple are all worth a look. You can visit the ancient business streets to admire the elegant classical wooden houses. If you like, stop at one of those tea houses and have a taste of the famous local snacks, such as Qingyan tofu, rice tofu and rose sugar.

Religious culture here is also quite rich, including Buddhism, Taoism, and Western Christianity. If you are interested in Buddhism, you can take this chance to learn the typical Buddhism culture here. Also, you will be impressed by patter of the Taoists. What's more, you will be surprised to find that so many residents here are Latin Catholic and Protestant Christian, since the Roman Catholicism was introduced here in 1851 by a French churchman and the Protestantism was introduced to Qingyan Town nearly 70 years ago.

While traveling in Qingyan Ancient Town, visitors will hear many stories of historical figures that were born or lived here. The first Zhuang Yuan (winner of the national examination) of Guizhou Province during the Qing Dynasty was Mr. Zhao Yijiong who was born and brought up in Qingyan Town. Mr. Chang Pinggang, the General Secretary of Dr. Sun Yat-sen was a county fellow of Qingyan Town.

Qingyan Ancient Town is really a fantastic place for visitors to learn about Chinese ancient culture. Time permitting, it is worthwhile to stay in the town for (at least) one or two days. By doing so, you can grasp a better sense of the classical elegance of this unique ancient town in the early morning.
at 03:11