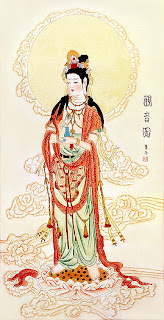 Some Roman Catholics believe that water from Lourdes and other holy wells and shrines have supernatural powers, such as for healing. This water, technically, is not holy water in the same sense as traditional holy water since it has not been consecrated by a priest or bishop. Other Christian groups have sold water from the Jordan River and called it holy water as well, since this is the location of the baptism of the Christ.

In the Orthodox Church there have been many miraculous springs of water throughout the centuries, some of which still flow to this day, such as the one at Pochaev Lavra in Ukraine, and the Life-Giving Spring of the Theotokos in Constantinople (commemorated on Bright Friday).

Many Muslims believe that water from the The Well of Zamzam in Mecca is divinely blessed. It is also believed to have supernatural properties.

The Sikhs prepare holy water, which is called amrit, and used in a ritual Sikh baptism.

Among the Mandaeans, baptism is the central sacrament of their religious life.

Though the term "Holy water" is not used, the idea of blessed water is also used among Buddhists. Water is put in to a new pot and kept near a Paritrana ceremony, a blessing for protection. Thai 'Lustral water' can be created in a ceremony in which the burning and extinction of a candle above the water represents the elements of earth, fire, and air.[2] This water is later given to the people to be kept in their home. Not only water but also oil and strings are blessed in this ceremony. Bumpa, a ritual object, is one of the Ashtamangala, used for storing sacred water sometimes, symbolizing wisdom and long life in Vajrayana Buddhism. Kundika is the version in Korean Buddhism [3], [4] whereas the vase of holy dew is known to Chinese and Japanese Buddhism [5],[6].

Did you prepare this in preparation for Theophany? Are you new calendar?

Your post made me think more about the word "holy" and doing a quick look-up I came up with that it originates from middle-english ....so I wonder what words in ancient texts are being translated as "holy". I also remember that the word holy derives from the word "whole" and the concept of being perfect. I don't think that when we refer to something as being holy that that particular item is, in itself, whole and perfect, but is set for us as a reminder of wholeness and perfection.

Well, those are the thoughts that arose after reading your entry! Thanks for bringing it up!