The 15 Days of the Spring Festival 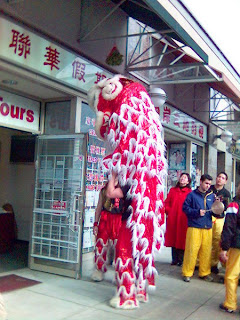 First day of the new year

The first day is for the welcoming of the deities of the heavens and earth. Many people, especially Buddhists, abstain from meat consumption on the first day because it is believed that this will ensure longevity for them. Some consider lighting fires and using knives to be bad luck on New Year's Day, so all food to be consumed is cooked the day before.

Most importantly, the first day of Chinese New Year is a time when families visit the oldest and most senior members of their extended family, usually their parents, grandparents or great-grandparents.

Some families may invite a lion dance troupe as a symbolic ritual to usher in the Lunar New Year as well as to evict bad spirits from the premises. Members of the family who are married also give red packets containing cash to junior members of the family, mostly children and teenagers.

Second day of the new year

Business people of the Cantonese dialect group will hold a 'Hoi Nin' prayer to start their business on the 2nd day of Chinese New Year. The prayer is done to pray that they'll be blessed with good luck and prosperity in their business for the year.

Third and fourth days of the new year

The third and fourth day of the Chinese New Year are generally accepted as inappropriate days to visit relatives and friends due to the following schools of thought. People may subscribe to one or both thoughts.

Fifth day of the new year

In northern China, people eat Jiǎozi (simplified Chinese: 饺子; traditional Chinese: 餃子) (dumplings) on the morning of Po Wu (破五). This is also the birthday of the Chinese god of wealth. In Taiwan Province, businesses traditionally re-open on this day, accompanied by firecrackers.

Seventh day of the new year

The seventh day, traditionally known as renri 人日, the common man's birthday, the day when everyone grows one year older.

It is the day when tossed raw fish salad, yusheng, is eaten. This is a custom primarily among the overseas Chinese in Southeast Asia, such as Malaysia and Singapore. People get together to toss the colourful salad and make wishes for continued wealth and prosperity.

For many Chinese Buddhists, this is another day to avoid meat.

Ninth day of the new year

This day is especially important to Hokkiens and Teochews (Min Nan speakers). Come midnight of the eighth day of the new year, Hokkiens will offer thanks giving prayers to the Emperor of Heaven. Offerings will include sugarcane as it was the sugarcane that had protected the Hokkiens from certain extermination generations ago. Tea is served as a customary protocol for paying respect to an honored person.

Fifteenth day of the new year

The fifteenth day of the new year is celebrated as Yuánxiāo jié (元宵节), otherwise known as Chap Goh Mei in Fujian dialect. Rice dumplings Tangyuan (simplified Chinese: 汤圆; traditional Chinese: 湯圓; pinyin: tāngyuán), a sweet glutinous rice ball brewed in a soup, is eaten this day. Candles are lit outside houses as a way to guide wayward spirits home. This day is celebrated as the Lantern Festival, and families walk the street carrying lighted lanterns.

This day often marks the end of the Chinese New Year festivities.
at 00:00

China Daily has a poll on what traditions Chinese People Observe at http://bbs.chinadaily.com.cn/viewthread.php?gid=2&tid=591149&extra=page%3D1 if you are interested.