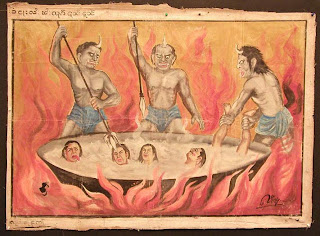 The Underworld, or Hell, according to many religious beliefs, is an afterlife of suffering where the wicked or unrighteous souls are punished.

Hell is usually depicted as underground. Within Islam and Christianity, Hell is traditionally depicted as fiery. Some other traditions, however, portray Hell as cold and gloomy. In Judaism, existence after life is not concrete, and may be portrayed as a state of neutrality and an eternal existence in nothingness ("Sheol", often mis-translated as hell).

Some theologies of Hell offer graphic and gruesome detail (for example, Hindu Naraka). Religions with a linear divine history often depict Hell as endless (for example, see Hell in Christian beliefs). Religions with a cyclic history often depict Hell as an intermediary period between incarnations (for example, Chinese Di Yu). Punishment in Hell typically corresponds to sins committed in life. Sometimes these distinctions are specific, with damned souls suffering for each wrong committed (see for example Plato's myth of Er or Dante's The Divine Comedy), and sometimes they are general, with sinners being relegated to one or more chamber of Hell or level of suffering (for example, Augustine of Hippo asserting that unbaptized infants, whom he believed to be deprived of Heaven, suffer less in Hell than unbaptized adults). In Islam and Christianity, however, faith and repentance play a larger role than actions in determining a soul's afterlife destiny.

Hell is often portrayed populated with demons, who torment the damned. Many are ruled by a death god, such as Nergal, the Hindu Yama, or concepts of the Christian Satan.

Modern understandings of Hell often depict it abstractly, as a state of loss rather than as fiery torture literally under the ground.

In Norse mythology, Hel, the location, shares a name with Hel, a female figure associated with the location. It is thought that this is where the english term of Hell derives. The Orthodox Christian term of Hades also refers both to the ancient Greek underworld, the abode of Hades, and to the god of the dead himself. Hades in Homer referred just to the god but eventually, the nominative, too, came to designate the abode of the dead.

Most Buddhist schools of thought, Theravāda, Mahāyāna, and Vajrayāna would acknowledge several Hells, which are places of great suffering for those who commit evil actions, such as cold Hells and hot Hells. Like all the different realms within cyclic existence, an existence in Hell is temporary for its inhabitants. Those with sufficiently negative karma are reborn there, where they stay until their specific negative karma has been used up, at which point they are reborn in another realm, such as that of humans, of hungry ghosts, of animals, of asuras, of devas, or of Naraka (Hell) all according to the individual's karma.

In Chinese mythology, the name of Hell does not carry a negative connotation. The Hell they refer to is Di Yu (trad. 地獄, simp. 地狱; lit. "underground hold/court"). Diyu is a maze of underground levels and chambers where souls are taken to atone for their earthly sins.

The popular story is that the word Hell was introduced to China by Christian missionaries, who preached that all non-Christian Chinese people would "go to Hell" when they died. As such, it was believed that the word "Hell" was the proper English term for the Chinese afterlife, and hence the word was adopted.

The Chinese view Hell as similar to a present day passport or immigration control station. In a Chinese funeral, they burn many Hell Bank Notes for the dead. With this Hell money, the dead person can bribe the ruler of Hell, and spend the rest of the money either in Hell or in Heaven. There is a belief that once the dead person runs out of Hell money, and if he does not receive more, he will be eternally poor.

The Christian doctrine of hell derives from the teaching of the New Testament, where hell is typically described using the Greek word Gehenna. Hell is the final destiny of the unsaved, where they will be punished for sin after the general resurrection and last judgment. Traditionally hell has been viewed as a place of eternal, conscious torment under the wrath of Satan (Lucifer). However, in modern times some Christian theologians have adopted alternative views such as conditional immortality and universalism.

Ancient Taoism had no concept of Hell, as morality was seen to be a man-made distinction and there was no concept of an immaterial soul. In its home country China, where Taoism adopted tenets of other religions, popular belief endows Taoist Hell with many deities and spirits who punish sin in a variety of horrible ways. This is also considered Karma for Taoism.
at 01:31