Feng Shui: Most prosperous year is 2009 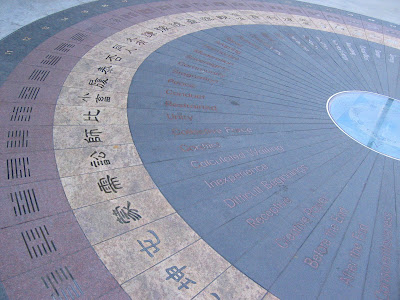 The Year of the Mouse threatens to see a build-up of international tensions, natural and air disasters, and a more turbulent stock market, soothsayers and analysts say.

As the Year of the Pig ends, followers of Chinese feng shui will be scurrying to consult fortune-tellers, astrologers, feng shui geomancers to guide their year ahead.

Chinese fortunes are based on a belief that events are dictated by the different balances in the elements that make up the earth -- gold, wood, water, fire and earth.

"The earth on top is Yang earth which symbolises a mountain, and mountain gives a sense of stability and firmness. But such floating earth in the ocean is weak in foundation and the stability appears to be fragile," Lo said.

"This elemental relationship will bring a year which apparently is more stable but there are a lot of underlying tensions and confrontations."

Lo added that the Chinese calendar follows a 60-year cycle, so 2008 will be similar historically to 1948, when Israel was established and the blockade of Berlin started, both events part of the build-up to long-standing conflict.

The lunar calendar is based on the cycles of the moon and associates each of the 12 years forming a partial cycle with an animal. Fortune-tellers base their predictions on the relationship between the zodiac animals and the characteristics of each.

The Mouse is the first of the 12 animal signs, so marks new beginnings, which Lo said will be reflected in changes of leadership in the United States and Russia.

The rodent is also seen as a "flower of romance" which means the year will stimulate romance, but also sex scandals.

More worryingly, it provokes a clash between water and fire which could mean heavy flooding or a tsunami, Lo added.

"The most famous water disasters in history, such as the south Asian tsunami in 2004 and the sinking of the Titanic in 1912, both incidents happened on a date with prominent appearance of the Mouse," Lo said.

He also said that the previous Year of the Mouse, 1996, witnessed more than 20 plane crashes including the Trans World Airlines Boeing aircraft which exploded over the Atlantic, killing 230 people.

Lee Sing-tong, a third-generation feng shui master, said China may suffer a water shortage in the next 12 months.

But after the property bubbles in the US and China's tightening monetary measures, Lee believes the US and China property markets will enter another chapter and will see stable development.

Although the subprime crisis has caused concerns in the global economy, unexpectedly the property market will stabilize in 2008.

He predicts a better economy for China after the 2008 Olympics. "2009 will be its most prosperous year in history," he added.

Kenny Lau, head of the small-cap sector at Credit Suisse, said the last three Mouse years had all seen very strong stock market growth in Hong Kong. It grew 232 percent in 1972, 30 percent in 1984 and 18 percent in 1996.

But he said high inflation -- he predicted 5.1 percent in Hong Kong and 6.5 percent in the Chinese mainland -- would provide a threat to economic growth and turbulent times were ahead.

His colleague Vincent Chan, head of China research, said the markets will not repeat the record returns of the past few years.

"It is likely that the volatility of the market in 2008 will be comparable to that of 2007, but the chance of significant absolute returns is rather remote," he said.
at 08:08