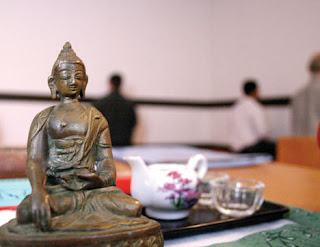 The department has asked all provincial culture offices to co-ordinate with local schools in organising religious activities for students, including Dhamma teaching by monks, either in schools or nearby temples Feb 13-15.

In addition, the department will co-operate with the World Buddhist University to organise a grand Buddhist sermon and celebration at Sanam Luang during the same period.

According to the Department of Religious Affairs Director-General, Buddhist- related activities to be attended by students nationwide would help reduce the younger generation's enthusiasm for Valentine's Day, considered as a western materialist cultural intrusion.

"Instead of letting our young people become obsessed with the day of love," Mr. Preecha said, "we should enrich their minds and souls with Dhamma teaching that will keep their lives healthy, both morally and spiritually," he said.
at 08:20