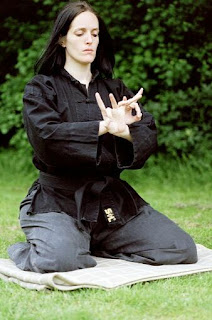 The Yì Jīn Jīng (Chinese: 易筋經; Wade-Giles: I Chin Ching; literally "Muscle/Tendon Change Classic") is a qìgōng manual most notable as the source of the attribution of Shaolin Kung Fu to Bodhidharma.

The Yijinjing is attributed in legend to Bodhidharma who is supposed to have been in China during the early 5th century A.D. However, there are many other versions of how the Yijinjing was handed down through history. The most popular story about Bodhidharma relates that when he went to reside in the Shaolin Monastery, he saw the monks were weak and unhealthy. In order to strengthen them, he devised a system of exercises called the Yijinjing. Before Bodhidharma's death, he gave to his successor, Hui-neng, two sacred books, the Xisuijing, and the Yijinjing. The Xisuijing unfortunately, did not survive history, but the other did. Some suggest the exercises are actually more Chinese and Taoistic in origin than Indian and Buddhistic.

This story is found in the preface of a 1875 edition by Surig Kuang called the Weisheng Yijinjing. The preface is said to have been written by Li Jing, a great military officer of the Tang Dynasty (618-906 A.D). It is dated the second year of the reign of Emperor Tai Zung of the Tang Dynasty (629 A.D). According to the foreword, Li Jing wrote:

In the time of the Hou Wei dynasty (424-535 A.D.), in the year of Tai Ho (477 A.D.) when Emperor Xiao Ming was on the Dragon throne, the Indian priest Bodhidarma (Da Mo in Chinese), arrived at the court of Wu Di, the first emperor of the Liang dynasty. He then went to the Kingdom of Wei in Northern China and lived in the Shaolin Monastery. After a residence of nine years, he died and was buried at the foot of the “Xiung-erh” Mountain, between the present day provinces of Honan and Shansi. After a course of years while his monument was being repaired, an iron box was discovered within his coffin.

The inside of the box was filled with wax which protected the contents. The contents were two books, one termed the Xisuijing and the other the Yijinjing.

The Yijinjing concerned the conservation of the body. The Xisuijing, however, was later lost to the world after several generations. The surviving text of the Yijinjing was written in the language of T'ienchu (as India was then called). There was great difficulty in having the text translated and the real meaning of the Yijinjing was lost.

What the priests of the Shaolin Monastery derived from the Yijinjing was the advantages of self-defence methods. One of the monks at the monastery argued that what Bodhidharma left could not be unimportant and just methods of self-defense. This monk went on a pilgrimage to the O-mei Mountains in the province of Szechwan in Southwestern China in search of one who could translate the work and extract the true meaning of the Yijinjing.

He soon met an Indian priest by the name of Pramiti. Pramiti told him that the language of Buddha cannot be readily translated because it is extra-ordinarily deep in meaning. Pramiti explained the Yijinjing only as far as he was able. The monk was invited to stay at the temple and be initiated by degrees into the details of the Yijinjing. In one hundred days of practicing, he became quite strong. In the second one hundred days, his entire body had received the full benefit. After the third one hundred days, his constitution became as hard as steel, and he felt he could be a Buddha. The visiting monk was so pleased that he accompanied the Indian priest wherever he went.

A person by the name of Xu Hung met the monk and Pramiti and obtained from them the secret method of the Yijinjing. Hsu Hung then gave the texts of the Yijinjing to a red-bearded person who in turn gave it to the writer of this preface.

The basic purpose of Yijinjing is to turn flaccid and frail sinews and tendons into strong and sturdy ones. The movements of Yijinjing are at once vigorous and gentle. Their performance calls for a unity of will and strength, i.e. using one’s will to direct the exertion of muscular strength. It is coordinated with breathing. Better muscles and tendons means better health and shape, more resistance, flexibility, endurance, and is obtained as follows: - postures influences the static and nervous structure of the body - stretching muscles and sinews affects organs, joints, meridians and Qi - torsion affects metabolism and Jing production - breathing produce more and better refined Qi - active working gives back balance and strength to body and mind (brain, nervous system and spirit).

Power and endurance are of paramount importance if we look at becoming qualified in whatever practice we choose, be it Tuina, martial arts, or simply better health and wisdom. Already another known Qigong system, Baduanjin, in its more radical and strong forms was used in the past from schools of Xingyiquan and Tijiquan as bodily preparation to fighting arts, in order to make body strong and flexible. Baduanjin still remains the first, entry-level routine to learn at Shaolin training schools in Song Mountains. We can still see today Japanese Kata like Sanchin, postures and forms like Siunimtao in Wingchung, “Iron thread” in Hung Gar and all sorts of Neigong in Neijia. Martial artists need to be powerful in the martial practice, like non-martial people need to be healthy. But there is also something supple and flexible inside of Yijinjing. Movements are energetic and intense, but you can see through a kind of peace. Yijinjing unifies in fact Yi (intention) with Li (strength), consciousness (yang) with muscular force (yin). The mind is free from thoughts, has a correct and well-disposed attitude, the breathing is harmonious. Internal and external movement must be coordinated, like movement with relaxation. Externally must be fortification; inside must be purification; unifying matter and spirit.

The Five rules of Yijinjing are: - Quietness Like lake water reflects the moon, a calm spirit allows energy to move inside the body - Slowness In order to use and flex muscles deeply, to get maximum extension and move Qi and Xue, slow movements are required - Extension Each movement must be brought to the maximum - Pause Efficacy comes through waiting and keeping tension for longer time - Flexibility Limbs and trunk must be extended so that blood and energy can circulate, so we have flexibility.
at 00:08

I love this, especially: "The movements of Yijinjing are at once vigorous and gentle."

That is true of many qigongs. I was doing a demo of Baduanjin (Eight Pieces of Brocade) the other day, and the ladies who participated were surprised at how their heart rates had risen just doing the slow and gentle movements of BDJ. And yet, they said they felt extremely relaxed. :-)

I also like this part: "Their performance calls for a unity of will and strength, i.e. using one’s will to direct the exertion of muscular strength."

I know a man who says that if you are not using your mind to direct your energy, you are "just exercising," you aren't doing qigong!