Being Buddhist by Not Being a Buddhist? 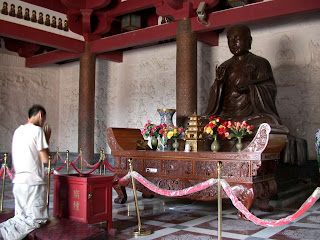 At the Washington Post's On Faith site, Dustin Eaton writes a lovely essay about not being a Buddhist. "I am not a Buddhist," he says. "I've never told anyone that I am a Buddhist and have in fact denied the title on more than one occasion." Yet he studies Buddhism and meditates daily.

Eaton, a Ph.D. candidate studying South Asian religion and culture at the University of Iowa, writes that "being a Buddhist means more than just saying you are one. It means placing yourself within the structure of a particular school, a particular lineage and a particular teacher. It means changing your life, not just changing your mind." Since he lives far away from a teacher or sangha, he isn't comfortable calling himself "a Buddhist."

I avoid calling myself a Buddhist, also, although for different reasons. The primary reason is not making "I am a Buddhist" just another ego attachment. I have enough layers of self-identity to chip through without building another one. When I do say "I am a Buddhist" -- because to say otherwise would be a lie -- I do a little purification ritual in my heart.

However, there's also a danger in wading too far into negation. The Madhyamika teachings of early Mahayana said that although phenomena -- including people -- are void of self-essence, it is incorrect to say that things and beings exist or don’t exist. As I understand it, form and appearance create the world of myriad things, but the myriad things have identity only in relation to each other. Thus, there is neither reality not not-reality; only relativity.

So, perhaps I shouldn't be so squeamish about saying "I am a Buddhist." I don't think Dustin Eaton should be, either.
at 00:21

I think a major reason that the Buddhist/non Buddhist distinction can be blurry is that Buddhism has so much to offer at the level of practice. While I'm "not a Buddhist," I've read and genuinely assimilated/adapted a number of its insights and approaches.

Mindfulness, for example, and the simple recognition of the interconnectedness of things, don't come with a tag saying you have to sign on to a credo that you may or may not agree with.

And imo, it's the spiritually pragmatic - the place where religion moves us at the level of self-awareness and identity - that's most spiritually vital.