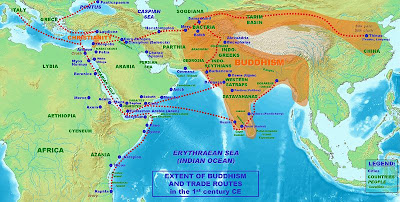 Some scholars believe that Jesus may have been inspired by Buddhism, and that the Gospel of Thomas and the Nag Hammadi texts reflect this influence. These theories have been popularized in books such as Elaine Pagels' The Gnostic Gospels (1979) and Beyond Belief (2003), and Elmar R. Gruber and Holger Kersten's The Original Jesus (1995).

One of the earliest and most prominent scholars of early comparative religions,Max Mueller, noted in his book, India: What it can teach us, published from England in 1883, "That there are startling coincidences between Buddhism and Christianity cannot be denied, and it must likewise be admitted that Buddhism existed at least 400 years before Christianity. I go even further, and should feel extremely grateful if anybody would point out to me the historical channels through which Buddhism had influenced early Christianity." A stronger case was made by Rudolf Seydel, Professor in the University of Leipzig (Germany), whose first book, The Gospel of Jesus in relation to the Buddha Legend, published in 1882, was followed by, The Buddha Legend and the Life of Jesus, published in 1897. In his books, he noted atleast 50 analogous parallels between the Buddhist and Christian stories.

Yale University Professor, E. Washburn Hopkins in his book, History of Religions wrote, "Finally, the life, temptation, miracles, parables, and even the disciples of Jesus have been derived directly from Buddhism." [9]

Historian Jerry H. Bentley considers "the possibility that Buddhism influenced the early development of Christianity". Bentley observes that scholars "have drawn attention to many parallels concerning the births, lives, doctrines, and deaths of the Buddha and Jesus".[10]

Iqbal Singh in the Buddhism Omnibus [11] acknowledges the early historical interactions and influence of Buddhism on the formation of early Christianity.

Thomas Tweed, Professor of Religious Studies at University of North Carolina at Chapel Hill, reports that, between 1879 and 1907, there were a "number of impassioned discussions about parallels and possible historical influence between Buddhism and Christianity in ... a variety of periodicals". But by 1906, this interest had waned. In the end, Albert Schweitzer's conclusion was favored: that although some indirect influence through the wider culture was "not inherently impossible", the hypothesis that Jesus' novel ideas were borrowed directly from Buddhism was "unproved, unprovable and unthinkable."[12]

Jesus was definitely a mystic which is something that "mainstream" Christianity (sadly) fails to recognize.

This truth is self evident in Orthodox Christianity.