The All Faiths Yantra 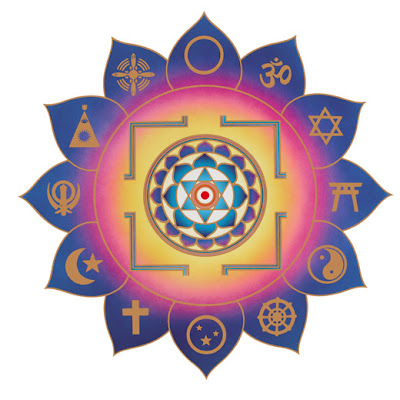 The All Faiths Yantra is an external image representing the central tenet of the LOTUS: Truth is one, paths are many. Sometimes external images are used in meditation or worship to symbolize or express certain aspects of the Divine. That is why we see so many holy pictures and images in temples and churches.

The Yantra represents the entire cosmos. God is originally unmanifest. The first expression of God begins as sound vibration. As the Bible says, "In the beginning was the Word..."

The dot in the center of the Yantra represents the first physical expression of that, the very core of the cosmos. And all the rays of manifestation—shown in the rings, the petals and the colors—come out of it. The entire Yantra is then surrounded by an open border, to show that the Divine Expression is infinite and unlimited.

When mantras—sounds that represent various divine qualities—are meditated upon, certain images are brought out, almost like liquid crystallizing into a solid form. Those images are yantras. Trataka is the practice of repeating a mantra, a sacred word, and visualizing a yantra. When you sit and pray or meditate in front of a yantra, you can feel those divine qualities: the love out of which God manifested the world, the peace of God that transcends all understanding.

And because God is not limited to any one tradition or creed, the symbols of all the religions are there. In this way, the Yantra is also a beautiful reminder that we can respect and learn from all the paths, and follow any one of them to reach the Divine.
at 10:24