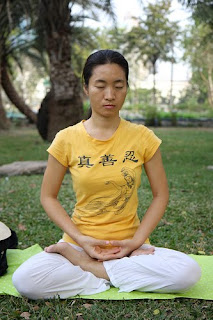 is a contemporaneity term used to describe an ancient Taoist Yogic Art of mind-body harmony that uses gentle movement, stretches, breath work, visualization and meditation to balance, strengthen and heal the body.

Its practice spans many thousands of years of continuous development and refinement, and include indepth methods of self-healing and spiritual development.

Taoist Yoga is an ancient precursor of what is termed Qigong in modern times, specifically the variety sometimes known as Nei Gong. Taoist Yoga was practiced in Chinese Taoist monasteries for body development, health preservation, self healing and spiritual cultivation in ancient times.
Taoist Yoga derives its roots from the ancient Dao Yin Practice as developed from the ancient Taoists in the Sacred Mountains in China.

The earliest forms of Daoyin were developed during the Early Han dynasty (206 BCE-8 CE), in the context of health and longevity as well as therapeutic movements. Daoyin practice was also referred to as Yangsheng 養生 in ancient times, which literally means “nourishing life.”
Some of the earliest sources on Daoyin include the Daoyin tu 導引圖 (Exercise Chart) and Yinshu 引書 (Stretching Book).

Dating to around 168 BCE, the Daoyin tu was discovered in the burial materials of Mawangdui 馬王堆 (near Changsha; Hunan). It consists of forty-four color illustrations of human figures performing therapeutic Yogic Postures, with accompanying captions. The exercises involve standing in specific postures that aim to cure corresponding illnesses.

Taoist Yoga practice has at its heart the cultivation of Vital Energy or Chi as termed by the Taoists. Through this nurturing of the Vital Energy in the practice of Taoist Yoga, one may gain a greater sense of well being, healing from disease, and gain longevity.

Taoist Yoga has three primary goals:
Modern Taoist Yoga comes from the tradition of Tao Yin (Dao Yin), of Han Dynasty China, whose earliest transcripts date back to about 180 BC. The Tao or way, as it is often translated, is the underlying component of reality. It is the infinite rhythm of our cosmos that every aspect of our life adheres to. It is the vibration of the electrons in atoms, the rotation of the earth and its revolution around the sun, the changing of the seasons and the rhythmic breath and heartbeat that keeps us alive and animated. The Tao comprises two opposite but interdependent aspects called Yin and Yang. Yang is the sun, the fervent, aggressive, powerful aspect of the universe. Yin is the shade, the nurturing, maternal and gentle aspect of the universe. The idea of the Tao, which is inherently Chinese, is similar to the Yogic term Prana which is from India. It is nice to see how two very different cultures can share an idea that is so pivotal to each of their traditional spiritual practices and ways of understanding reality.

Tao Yin is the cultivation and understanding of Tao through soft, gentle, healing and nourishing exercises. The early Taoists developed many practices geared toward keeping themselves healthy and prolonging their life so they could spend more time practicing, studying and meditating to understand the deepest aspects of Tao.

Both Hatha Yoga and Taoist Yoga have different exercises, philosophies and breathing techniques, but the underlying foundation practice is very similar in regards to the shared practice of 'The Three Regulations.

The way for a person to realize his or her own personal truth must be taught in an individual way. Focus must be placed on teaching how a person can come to understand truth and beauty through pure and simple means. There is no harm in leading all people to the secrets that have been unfairly protected through dogma over the past centuries. The nature of the Tao is to change, move and be spontaneous. Therefore no one teaching can hold the secrets to the Tao. It will be different for each person at different times in his or her life.

Taoist Yoga is a general term used by some practitioners of Taoism to categorize a multitude of traditional postured based exercises that are practised to maintain health and well being. Some say it is based on Hatha Yoga, but this is merely opinion. In fact some of the postures look very similar to the Hindu postured based exercises called Yoga. The name Yoga is used to make an analogy so, that people can paint an image of what the practice of Taoist Yoga might be like.
at 02:19